Posted at 13:33h in Health by The National Center

New York, NY – The award-winning documentary feature film “A Billion Lives” is kicking off its worldwide theatrical release on Friday, October 28, 2016, with a one-week limited engagement playing in New York City at the Cinepolis Chelsea until November 4th. To kick off this special engagement, members of the media and concerned thought leaders are invited to join award-winning Director Aaron Biebert for an exclusive screening and panel discussion. 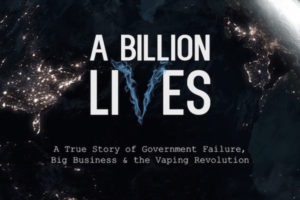 Stier recently authored a chapter in the Adam Smith Institute report, “Sinnovation, how markets can solve public health problems – but government gets in the way.”

In the report, Stier wrote that “E-cigarettes have split the public health lobby in two. On one side are those focused on harm reduction, who see e-cigs as a substantially safer alternative to cigarettes for people who are already smokers. On the other are those who see fundamental lifestyle change as the goal for smokers, and e-cigs as an obstacle to that.”

“In ‘A Billion Lives,’ producer Aaron Biebert beautifully depicts the magnitude of the divide,” says Stier.

The World Health Organization (WHO) estimates that a billion lives will be lost this century due to smoking-related illnesses. Meanwhile, smoke-free alternatives, like e-cigarettes and vapor technology that are helping people quit smoking, are estimated to be 95% safer than smoking cigarettes, yet are being banned, restricted, and unfairly maligned as “a gateway to smoking” and “dangerous.”

Director Aaron Biebert, whose critically-acclaimed film is igniting a worldwide movement to save a billion lives, is hosting a panel to discuss these issues and more. The experts joining him who appear in the film include:

The panel, which will begin immediately after the 8pm screening, will be moderated by Jared Meyer, a public policy expert with the Manhattan Institute and author of the recent Forbes Magazine article titled, “Government Puts Tobacco Interests Above A Billion Lives.”

The media is invited to attend the “A Billion Lives” premiere/panel discussion on Friday, October 28th at the Cinepolis Chelsea Theatre. Seating is limited so please RSVP by October 24th. For additional information, visit ABillionLives.com/New-York-City.

View the trailer at ABillionLives.com. Film screeners are available upon request.

Jeff Stier is a Senior Fellow at the National Center for Public Policy Research in Washington, D.C., and heads its Risk Analysis Division. His National Center op-eds have been published in top outlets including The Wall Street Journal, USA Today, The Los Angeles Times, the New York Post, Forbes, the Washington Examiner and National Review Online. His more scholarly writing has been published in the Hoover Institution’s journal, Defining Ideas, The Cato Institute’s Regulation, and Springer’s Cancer Causes and Control. He has testified before many bodies at the city, state and international level and has appeared on the Fox News Channel, CNN, CNBC and other television networks and is a guest on talk radio programs approximately 100 times a year.