Press Release
Posted at 06:18h in Free Enterprise Project by The National Center

In the Face of Potential Boycotts, CEO Jeff Bewkes Concedes That Judgment over Media Bias Will Ultimately “Be Made by the Viewer”

Burbank, CA / Washington, D.C. – As anti-Trump political extremism intensifies and turns violent, Time Warner CEO Jeff Bewkes defended CNN against charges of bias but said he would “recommit” to “an attempt to be independent.” At today’s annual Time Warner investor meeting, a representative of the National Center for Public Policy Research’s Free Enterprise Project (FEP) warned that shareholders’ return on investment could be harmed due to viewers and advertisers dumping the news channel in response to its overwhelmingly anti-Trump coverage. Bewkes also stood by the company’s sponsorship of an organization performing a version of “Julius Caesar” in which a Trump-inspired Caesar is brutally murdered. 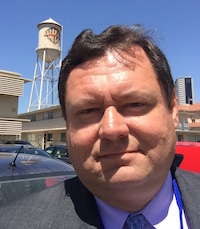 “A day after conservative lawmakers were targeted by a politically crazed gunman, my question that took Time Warner executives to task for CNN’s contribution to the increasingly uncivil environment in Washington was very relevant,” said National Center Vice President and FEP representative David W. Almasi, a Time Warner shareholder who attended the meeting. “It’s good to hear Mr. Bewkes say he will recommit to making CNN more objective, but we will follow Reagan’s ‘trust but verify’ approach since he has promised this same thing in the past. Mr. Bewkes seemed unconcerned with the startling numbers I presented to prove how biased CNN can be, and I warned him of the folly of providing confirmation bias to the political fringe.”

During the meeting – held at Warner Brothers Studios in Burbank, California – Almasi raised concerns about strong anti-Trump bias in CNN coverage. He cited a Media Research Center analysis showing overwhelmingly negative coverage of the Trump Administration. Almasi also inquired about Time Warner’s sponsorship of the Public Theater, whose controversial presentation of Shakespeare’s “Julius Caesar” in New York City has the character of Caesar appearing to be Trump and being brutally murdered. Delta Airlines and Bank of America withdrew their support of the theater organization due to the content.

In his prepared question addressed to Bewkes, Almasi said:

Mr. Bewkes, we have urged you many times to make CNN more objective… But bias is apparently worse than ever. As shareholders, we are concerned about the reputational risk to our investment in Time Warner as CNN appears to be a key player in the war against the Trump presidency…

Are you concerned about advertisers leaving CNN? Will you continue to ignore appeals for objectivity at the risk to our investment in Time Warner? People are also wondering why you aren’t following Delta and Bank of America in dropping support of the Public Theater — especially now that extremism seems to be breeding violence.

The full text of FEP’s prepared question for the Time Warner shareholder meeting is available here.

Near the end of the almost 12-minute exchange between Almasi and Bewkes, Bewkes said:

[W]e will recommit — I’ll do it to you now — for an attempt to be independent… I don’t want you to be skeptical of our effort, and we’re very sincere to try to achieve that. The decision on whether we’ve failed — you’re right —will be made by the viewer.

The audio of the full exchange is available here.

Bewkes also said Time Warner would continue to fund the Public Theater, arguing that it was not providing direct funding to the controversial play.

“Money is fungible, and anything Time Warner gives to the Public Theater makes it easier for the group to put on its brutal anti-Trump version of Julius Caesar,” Almasi added. “When Kathy Griffin posed with a mock bloody severed Trump head, that was also for art. Executives at Time Warner’s CNN saw the growing controversy and quickly fired her. They understood the risk to the company’s reputation there, but they are letting the Public Theater matter slide.”

Now is the Time to Celebrate America

ConservativeBlog.org / July 3, 2020
Forget the Fourth? No way! Scotty Smart, who doesn’t think Americans should honor the nation’s birth but must instead “hold America accountable” for racial injustice, …
READ MORE

ConservativeBlog.org / July 1, 2020
During a recent panel discussion about judicial reform and liberal efforts to block Senator Tim Scott’s police reform bill, Project 21 member Vince Ellison assured …
READ MORE
The National Center for Public Policy Research is a communications and research foundation supportive of a strong national defense and dedicated to providing free market solutions to today’s public policy problems. We believe that the principles of a free market, individual liberty and personal responsibility provide the greatest hope for meeting the challenges facing America in the 21st century.
Learn More About Us
Subscribe to Our Updates