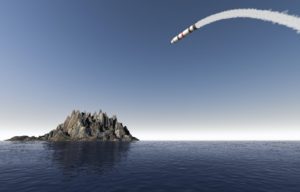 Back in the day, conservatives used to prank each other with a little joke that went something like this:

Did you hear? There was a massive earthquake in California today.

No. A brand new fault.

Thank you. Thank you. I’ll be here all week. Don’t forget to tip your servers, and try the veal.

Of course, that joke easily translated to the Bushes later.

Today, the torch was definitely passed on to Donald Trump.

In Hawaii, during a test of the warning system at a state-run government facility, a yet-to-be-identified state worker managed to send out an alert to the media and local cell phones that read:

BALLISTIC MISSILE THREAT INBOUND TO HAWAII. SEEK IMMEDIATE SHELTER. THIS IS NOT A DRILL.

For over 30 minutes, people were scrambling for shelter in sewers and other allegedly safe spaces until the Hawaii Office of Emergency Management finally said “my bad.”

There was never a real threat. There was no international crisis precipitating the alert. NORAD was not fooled by a flock of geese. It was a stupid mistake. 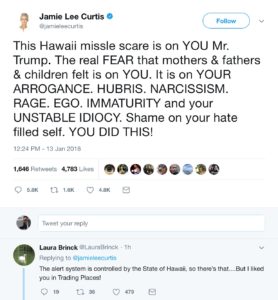 But, taking a cue from the Rahm Emanuel school of never wanting a crisis to go to waste, liberals hit Twitter to blame the President for 2018’s “War of the Worlds.”

Actress Jamie Lee Curtis tweeted that “[t]his Hawaii missile scare is on YOU Mr. Trump.” How? Among other things, it appears that the President’s “arrogance,” “ego” and “immaturity” corrupted some low-level bureaucrat’s skill-set in the mind of the actress best known for battling serial killer Michael Myers on various Halloweens. She seemed to think President Trump’s “unstable idiocy” manifested itself thousands of miles from Mar-a-Lago, forcing some functionary to send out the errant alert.

While such extreme and ignorant pablum is expected from the Hollywood elite, it’s a shame that the same sort of vitriol came from an American politician as well. And, in this case, it came with a demand to change policy – likely for the worse. 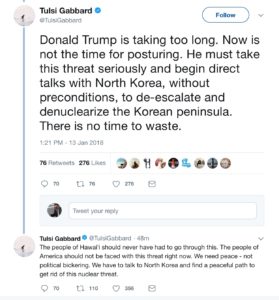 Representative Tulsi Gabbard is a member of Hawaii’s solidly left-wing congressional delegation. Pretty much all of Hawaii’s government, it should be noted, is a deep-blue stronghold.

Gabbard tweeted that people on the islands “should never have to go through this.” Rather than being introspective and perhaps suggesting reforms of the way the Hawaiian civil service operates – as others have already begun doing – she sought to turn it into an indictment of Trump Administration foreign policy. She specifically criticized policy toward North Korea. Recognizing that “Little Rocket Man” Kim Jong Un poses a threat to America, she nonetheless suggested it is up to President Trump alone to “find a peaceful path to get rid of this nuclear threat.”

But Trump’s tweets prodding Kim – the ones that obviously fueled the vitriol of Curtis and Gabbard – appear to have worked. Since when have North and South Korea entered into direct talks? Since Trump’s tweets, after years of silence. And Trump is open to talking with the North Koreans – without preconditions.

The unwarranted fear foist upon people in Hawaii was regrettable, but it’s not a regret Trump must bear. If anything, his work may be diminishing that overall threat. Not that the left – by way of Washington and Hollywood – is willing to admit.