ConservativeBlog.org
Posted at 14:33h in Blog by David Almasi 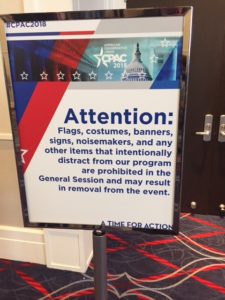 In Catch-22, Joseph Heller wrote: “Just because you’re paranoid doesn’t mean they aren’t after you.”

At this year’s Conservative Political Action Conference, there was a ban on waving flags in the general session auditorium. Was the CPAC leadership showing some bizarre solidarity with Antifa or Colin Kaepernick? Hardly. They were targets of a left-wing and (dare I say it) media-driven prank last year.

Fool me once, shame on you. Fool me twice, shame on me. Someone did try to do it again this year. They almost got me.

Just before President Donald Trump addressed CPAC 2017, left-wing activists with a group called Americans Take Action infiltrated the general session room and passed out flags to the crowd. What might have looked like patriotic flags with Trump’s name on them were actually Russian flags.

I put the media into this caper because one of the ATA activists was Ryan Clayton – who has written for the Huffington Post. When HuffPo gleefully reported on what Clayton did, the reporter happened to leave out his HuffPo credentials. The affiliation was later exposed by James O’Keefe of Project Veritas.

And the Huffington Post didn’t seem to mind a writer was advocating. In fact, they let him post about doing it.

After the President’s 2018 CPAC address last Friday, I mentioned having seen the new rule posted and told my co-workers about the 2017 subterfuge while we had lunch outside the Gaylord resort where the conference was being held. 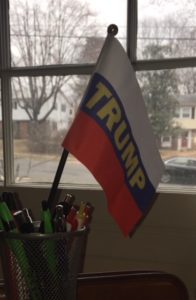 On our way back, as if on cue. we were approached by a smiling women who offered us the exact same flag as was used by ATA last year. Of course, I took one. I wanted a souvenir!

I didn’t let on that I was aware of her cunning ruse. I did wonder aloud to my co-workers as we approached the Gaylord as to how many people there might be inside ready to take photos of people waving these flags this year.

Within 15 minutes, I found one.

Heading down to the exhibit area, I saw a friend sitting at a table having lunch. I sat down with him to catch up on things. I told him about my encounter outside, and pulled the flag out of my backpack to show him. Seconds later, another person who was at the table with us warned me that a guy over my shoulder was trying to take my picture.

I quickly put the flag down. The guy knew he was spotted, and tried to make the best of it. He tried to flatter me about what a patriotic pose I had made (please!). He asked me to pose for him. I declined.

The guy had a press pass – claiming to represent a website called Cheddar. It’s unclear to me why a site that wants to be the “CNBC of the Internet” is interested in patriotic glamour shots, but one of its executives did claim “[w]e hope millennials come to us for the Trump stuff.” Fair enough, but I’m 50 – I don’t exude a signal of hipness for the millennial crowd.

P.T. Barnum may not have really said “there’s a sucker born every minute,” but it applies to what’s been going on at CPAC in trying to create collusion. And, as some people like to tack onto the phrase, there are also two people out there to take that sucker for a ride.

Since my first CPAC in the early 90s, it has grown exponentially in size, notoriety and attention from the media. It has always been a target for media wanting to find fault with conservatives. It’s regularly judged by its most radical members or most salacious exhibit hall swag. Or, in the case of fabulist Stephen Glass in the New Republic in 1997, the bad stuff is just made up.

While publicity is nice, perhaps media passes in the future should be a little harder to get. I know at least one conservative writer who was denied media credentials and told to buy a ticket. Maybe apply the same skepticism on media catering to the left next year.