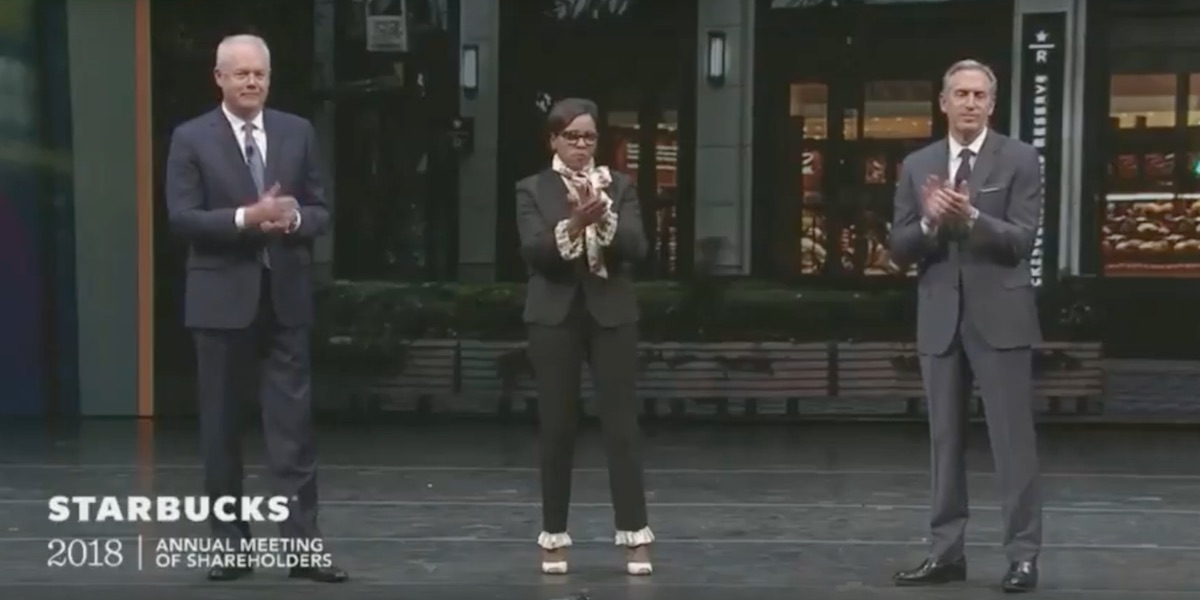 Press Release
Posted at 22:08h in Free Enterprise Project by The National Center

Seattle, WA/Washington, DC – Howard Schultz, the former CEO and current executive chairman of the Starbucks coffee chain, ripped into former President Barack Obama and other politicians today for causing the national debt to skyrocket. This came as Justin Danhof, Esq., the Director of the National Center for Public Policy Research’s Free Enterprise Project, confronted the company’s leadership at today’s annual meeting of shareholders about Schultz’s repeated attacks on President Donald Trump’s signature tax cut — even as Starbucks employees are reaping the benefits of that law. In response, Schultz took Washington to task – including President Obama – for robbing future generations with its profligate spending.

“It’s nice to see a little candor from a person who has made promoting the agenda of liberal politicians like Obama a part of his business model,” said Danhof, who attended the meeting in Seattle, Washington. “But he still bashed the tax reform that another Starbucks executive earlier credited for increased pay and new stock bonuses, paid family leave and sick-pay benefits. He still refused to show any remorse for downplaying the effects of tax reform on the company’s front-line employees.”

In his response to Danhof’s question, Schultz blamed politicians from both political parties. His public criticism of Obama, a man he endorsed for president twice, was unexpected. Schultz said: “President Obama… [is] compliant in the reckless approach to the amount of debt. And if this was a business, we’d be approaching insolvency.”

In his question, Danhof noted:

During these comments, Danhof addressed the issue of the deficit, criticizing Schultz’s liberal party-line pseudo-economic claim that tax cuts will drastically increase the deficit:

It’s shocking to hear Mr. Schultz object to a law that’s helping so many Starbucks employees and their families. If he cares more about criticizing the President, he has the right to enter the political arena. But this law is helping Starbucks partners.

So, my question is for [Starbucks CEO] Kevin [Johnson]: Do you agree with your predecessor that the recent tax cuts, that have benefited so many Starbucks partners, are “fool’s gold” designed to rob future generations?

“It seems like Howard Schultz cares more about liberal political grandstanding than the welfare of Starbucks employees,” said Danhof. “This was in stark contrast with current CEO Kevin Johnson, who told me he separates his politics from his professional duties and is committed to ‘always do the right thing for our partners, our customers and our shareholders.’ That’s a refreshing change to which we can all raise a mug.”

Additionally, Schultz tried to throw Danhof off-topic when Danhof acknowledged Schultz’s earlier joking about his treatment during an appearance at a recent event hosted by the conservative American Enterprise Institute. After Danhof said he “kinda feel[s] the same way when I come here every year – just in reverse,” Schultz claimed Danhof “mischaracterized” his comments and that there was “nothing disrespectful about it.” Speaking about his AEI experience, however, Schultz clearly made lighthearted comments that might infer he didn’t expect to be treated respectfully. He said “it went fairly well, actually… No, I don’t say that with… ah… well… ,” and then smiled in response to the audience’s laughter. Danhof, to the contrary, was heckled by the crowd and interrupted by company leaders at the Starbucks meeting.

“Howard Schultz mixes politics and retailing at Starbucks, but he refuses to give the credit that the Trump Administration deserves for helping him meet his social justice goals,” said National Center Vice President David W. Almasi. “Investors were explicitly told by another executive that the Trump tax reform plan helped Starbucks increase pay and benefits for its employees, yet Schultz continues to rail against the White House. At least he had the guts to call out his fellow liberals, including Obama, for exploding our national debt.”

Today’s meeting marks FEP’s fourth participation in a shareholder meeting in 2018. Its previous meeting, of the Walt Disney Company, led to a public apology to the Christian community by Joy Behar, host of “The View”.