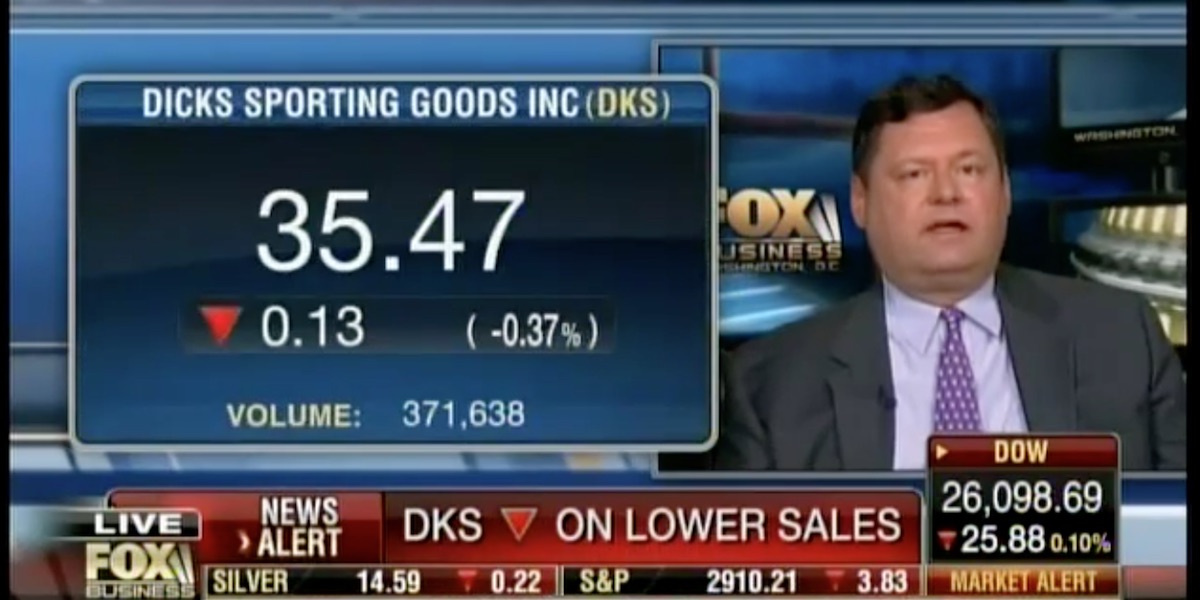 Dick’s Sporting Goods, infamous for joining the anti-gun mob after the Parkland school shootings earlier this year, saw its stock tumble upon news of an anemic second quarter earnings report.

In an interview on the Fox Business Network program “Varney and Co.,” National Center Vice President David W. Almasi told host Stuart Varney that Dick’s CEO Ed Stack “has dug in his heels, and there’s no way this chain is gonna get out of it.”

Unfortunately, they’re gonna have to ride this down. Because they’ve had three calls – three earnings calls – now where they said this has hurt their business. But they’re not gonna make any way of changing it. And so it’s up to people like us to make sure that they understand that there is a political cost to this from conservatives, from Second Amendment advocates.

At the meeting, when discussing the potential loss of customers over its restriction of gun sales, Stack roared that is was “fine!” that David didn’t plan to patronize Dick’s stores anymore. With underperforming sales expected throughout 2018, the question remains: Is Stack fine about all the other people who seem to have turned their back on Dick’s?

Due in part to poor sales of hunting-related products and the fact they are no longer selling certain rifles, high-capacity magazines and any guns or ammunition to customers under 21, Dick’s in-store sales were down approximately four percent from last year. Sales in that space are apparently so poor that they are completely phasing out hunting items in ten stores. Stack would not make that information available to investment professionals on the call. This is obviously a test to see about completely exiting the market.

And Dick’s problems – “headwinds,” as Stack called them – are likely to continue through the rest of 2018 with diminished expectations for hunting season and Christmas sales. When Varney asked why FEP would want to own shares of a company with which it strongly disagrees, David explained:

We need a voice in the company.  And, if our Free Enterprise Project didn’t go to companies like United Airlines and Bank of America and Dick’s Sporting Goods and stand up for the Second Amendment, no one else would. I was the only person at that meeting who stood up for the rights of gun owners and the rights of shareholders who support the idea that a sporting goods store should be selling guns…

The unfortunate thing about some of these shareholder meetings is that few people go. And that’s another reason why a group like our Free Enterprise Project is so important – to go; to represent people; to make sure the board, the management and other shareholders understand.

The Fox Business Channel reached out to Dick’s Sporting Goods before the interview, but did not receive a response.

Varney also asked David about political bias in the high-tech sector – particularly social media companies. Varney pointed out that “they’re doing, in a way, I think, what Dick’s Sporting Goods did with guns.” David said: