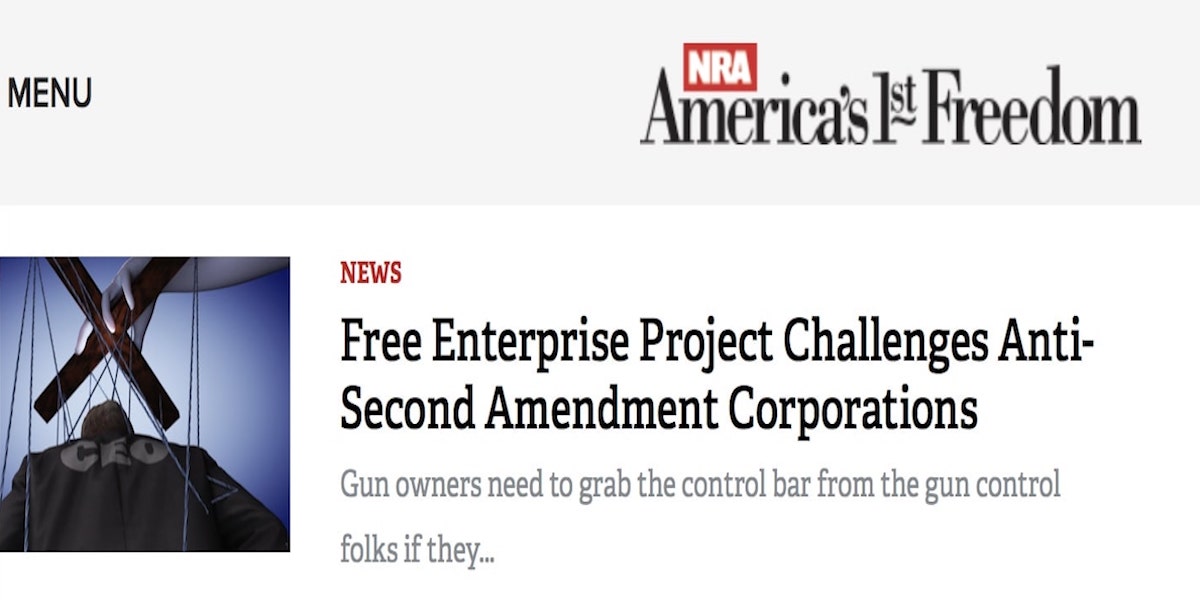 Over a dozen companies began an assault on the National Rifle Association immediately after the Parkland, Florida school shooting last February. Business deals were broken, and harsh words against 2nd Amendment freedoms were uttered. It’s something Justin Danhof, Esq., the director of the National Center’s Free Enterprise Project (FEP), called an “inevitability” that fits an “all-too-common pattern.”

Justin recently authored a three-part series published by America’s First Freedom, one of the National Rifle Association’s most high-profile publications, that detailed how the left uses corporate America to try to roll back the constitutional right to keep and bear arms – among other things. (click here to read part 1, part 2 and part 3)

FEP attended dozens of corporate shareholder meetings this year alone – including ones where FEP representatives worked to protect the interests of gun rights during the meetings of Bank of America, United Airlines and Dick’s Sporting Goods. In venues where conservative and free-market advocacy is now sorely lacking, FEP openly and brazenly challenged corporate leaders on their hostility to gun owners, gun rights supporters and the Constitution itself.

Along with their assault on guns, leftists have used the strength of corporate America to do their bidding to halt the funding of free-market organizations, to oppose religious freedom, to remove gender restrictions in public bathrooms and more. The repetition goes something like this: Leftist politicos and purveyors of fake news take up a cause. Radical activist groups create social media campaigns – such as #BoycottNRA – in an effort to bend businesses to their liberal will. Corporate America joins the fray, and that support is used to fund, bolster and justify the initial cause. It’s a simple yet decidedly effective pattern.

And when liberals find themselves out of power politically, as they do now (with conservatives controlling the White House, Congress, and a vast majority of state houses), this pattern goes into overdrive. When liberal political power wanes, corporate America becomes the left’s arbiter of morality…

As the director of the nation’s only full-time, conservative shareholder advocacy organization, I have witnessed these political battles firsthand. While the public advocacy efforts, buoyed by the mainstream media, play on the main stage, behind the scenes there is a massive progressive investment community that uses shareholder mechanisms to apply tremendous pressure on corporate America.

In the cases of legislation the left opposed but lacked political influence among state legislatures and governors, “it was corporations that moved the needle” and did the bidding of the radicals.

How did this happen? Justin chronicled a rise in liberal investor activism after corporate America and its representatives effectively beat back the proposed “Hillarycare” takeover of American health care in 1993. By 2009, after years of prodding from liberal investor activists, many of those same corporate entities fell into line with the left and actually backed much of the same scheme to bring health care under more government control when it resurfaced in the Obama Administration.

The left has become adept in its corporate strategy:

While there are many issues at play, one clear aspect was the dynamic rise in liberal investor activism. Until that time, investment activism was largely limited to good governance groups. However, the left soon realized the awesome power an engaged investor can wield over corporate actions.

There are currently dozens of liberal groups representing billions of dollars in assets that annually dedicate significant resources to influencing corporate America. They do so by filing shareholder proposals, staging protests, building social media campaigns and attending shareholder meetings. Perhaps the most powerful of these tools is the least well-known: shareholder proposals.

Liberal groups use shareholder proposals to shift corporate attitudes to the left on issues such as health care, the environment and philanthropy. Proposals provide the proponent direct access to high-level corporate executives. Corporations hate shareholder resolutions, so executive-level staff often negotiate terms for an agreement to withdraw a particular proposal. Liberal activists score major policy concessions as part of those negotiations.

This unassuming process is one of the ways that the left has been so influential at drawing corporations into its fold.

When that doesn’t work, there are always high-profile media campaigns like the heavy-handed effort to dry up corporate support for the free-enterprise-oriented American Legislative Exchange Council (ALEC). Focusing on ALEC’s support of “stand your ground” laws, leftists used the 2012 death of Trayvon Martin to pressure businesses to drop their membership and support of ALEC:

Given the choice between fighting a public relations battle against liberal advocacy groups accusing your company of being racist and complicit in murder, or dropping your membership in ALEC, is it any wonder that so many corporate leaders chose the latter?

Call it advocacy, call it extortion – but it’s simple and it’s effective.

FEP is there, but it stands virtually alone in the fight to hold corporate America accountable for straying from the free-market and pro-liberty values necessary for economic prosperity and innovation. This is a problem. Justin pointed out:

If only liberals speak up on political topics, engage as investors, and “vote” with their wallets, then corporations have cover to offend conservatives with impunity. That’s why we at the Free Enterprise Project speak up for the silent majority on so many important constitutional and public policy concerns. But we need your help.

Without that help, the outcome is easy enough to figure:

[S]ince liberal shareholder activists exponentially outnumber conservative ones, corporate America has been drifting further to the left over the last decade and a half. That’s one reason why so many CEOs feel emboldened to take up liberal causes and dictate a progressive morality to the rest of us—they rarely encounter conservative pushback.

At the Free Enterprise Project, we are trying to level the playing field. We use the same investor instruments as the left does to counter corporate America’s moral virtue signaling.

Corporations virtue signal and carry water for liberal causes because the silence on the right makes it easy to do so. Conservatives rightfully see companies – large and small – as the driver of economic success that makes America the greatest country in the world. Therefore, conservatives, generally speaking, don’t boycott or protest or really bother businesses at all.

That silence has been at the peril of liberty.

And, as Justin explained, participation can be as easy as buying a few shares of a company’s stock in order to be able to attend the shareholder meeting and raise an issue:

Shareholder meetings provide a once-a-year forum in which CEOs directly answer questions from their investors. After the corporate backlash following Parkland, gun rights supporters had spoken on television, talk radio, online, and in person about their angst with corporate America’s moralizing and anti-Second Amendment stance, but the CEOs didn’t have to answer to any of that. When I confront them face-to-face, they don’t have a choice.

As chronicled in the series, FEP appearances did make a difference.

A public challenge to United was used by CNBC for a particularly harsh segment about United, and Inc. magazine did an informal survey of employees that showed disagreement with corporate leaders on guns and the NRA. Dick’s Sporting Goods executives were warned about their activism hurting their bottom line and shareholders’ return on investment – something they had to admit a few months later on an earning call with skeptical Wall Street heavyweights. And Justin’s pressure on Bank of America undoubtedly played a role in the company backtracking on a pledge not to make loans to certain gunmakers.

While companies deserve to have a political voice, it’s clear that not all companies are using it properly. They are sometimes being hijacked into supporting anti-business, anti-shareholder and anti-community positions because they think they are avoiding controversy. It’s up to conservatives to make sure they realize this radical drift is controversial and comes at a price.