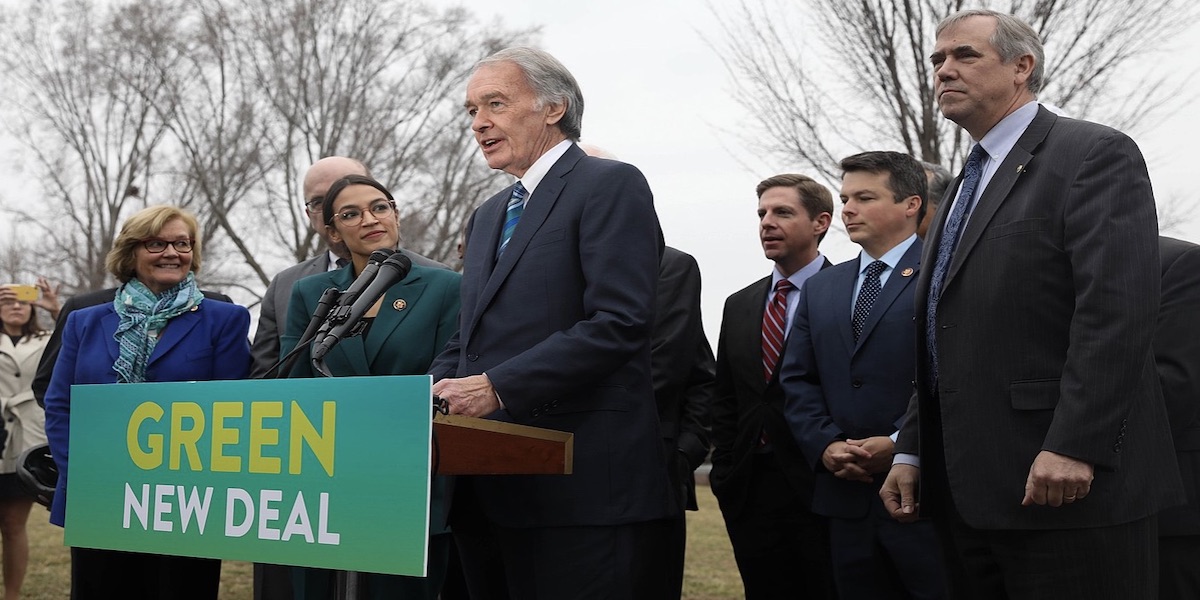 ConservativeBlog.org
Posted at 16:33h in Blog by Jennifer Biddison

President Donald Trump spoke out against socialism during his recent State of the Union address. He proclaimed, to the loud applause and chants of “U.S.A.” from his supporters and the chagrined silence of his critics: “We are born free, and we will stay free” and “we renew our resolve that America will never be a socialist country.”

One of those critics, Representative Alexandria Ocasio-Cortez, later claimed that President Trump is “scared” of socialism. “Of course he is,” writes National Center Vice President David W. Almasi in a commentary distributed by InsideSources that appeared in newspapers such as the Klamath Falls Herald and News and Houma Today. “Anyone who isn’t already afraid of socialism should look at the ‘Green New Deal’ that AOC has introduced.”

David points out that the Green New Deal seeks to fundamentally transform America over a decade by phasing the nation out of fossil fuels, nuclear power, airplanes, private vehicles, cows and virtually every building in America not deemed to be eco-friendly. It also “expands beyond the environment” to enhance the government’s role in providing welfare and health care.

Considering that is what the socialists want to do to America, being “scared” of socialism isn’t cowardly. It’s wise.

Unwilling to chalk this up to AOC’s youthful exuberance and freshman status in Congress, as some have tried to do as the Green New Deal has been picked apart and examined, David notes:

These are not just the dreams of a naive freshman member of Congress. Her Senate co-sponsor is Edward Markey, who has served on Capitol Hill for more than 40 years. And the Green New Deal has been embraced by presidential aspirants such as Elizabeth Warren, Cory Booker and Kamala Harris.

This Green New Deal is a big deal. It could cost trillions, and radically affect peoples’ lives and livelihoods. Even if it goes nowhere, the enthusiasm for it tips the hand of the liberal caucus.

Of course this makes President Trump scared about the prospect of socialism in America.

Venezuela is an obvious example of the failure of socialism abroad, which David – and the President, in his address – have noted. Additionally, David writes about a flirtation with socialism, already tried here by a major business, that spectacularly failed:

Look what socialism did to Venezuela. Hugo Chavez and Nicolas Maduro turned what was once the wealthiest country in South America into a dystopian state where crime is high and supplies are low. Energy production in this oil-rich country is down. Zoo animals are being eaten while the military is physically blocking humanitarian aid from crossing the border.

Yet socialism remains popular among American liberals. There are those who claim Venezuela is not “real” socialism, and they hanker they can do it correctly in the United States.  But it’s already failed here.

For the past nine years the Panera Bread restaurant chain operated several Panera Cares locations across America that had no set prices. Customers could pay as much or as little as they liked. The expectation was that the richer clientele would subsidize poorer patrons. On February 15, the last Panera Cares location closed. Panera management said the model is “no longer viable.” Other charities sent their needy over. People who weren’t needy took advantage of it. Security concerns became an issue. Panera will remain charitable, but in a more controlled manner.

To read David’s entire commentary as it appeared in Houma Today, click here. InsideSources content is read by around 25 million people a month and is syndicated to almost 300 of the top American newspapers.