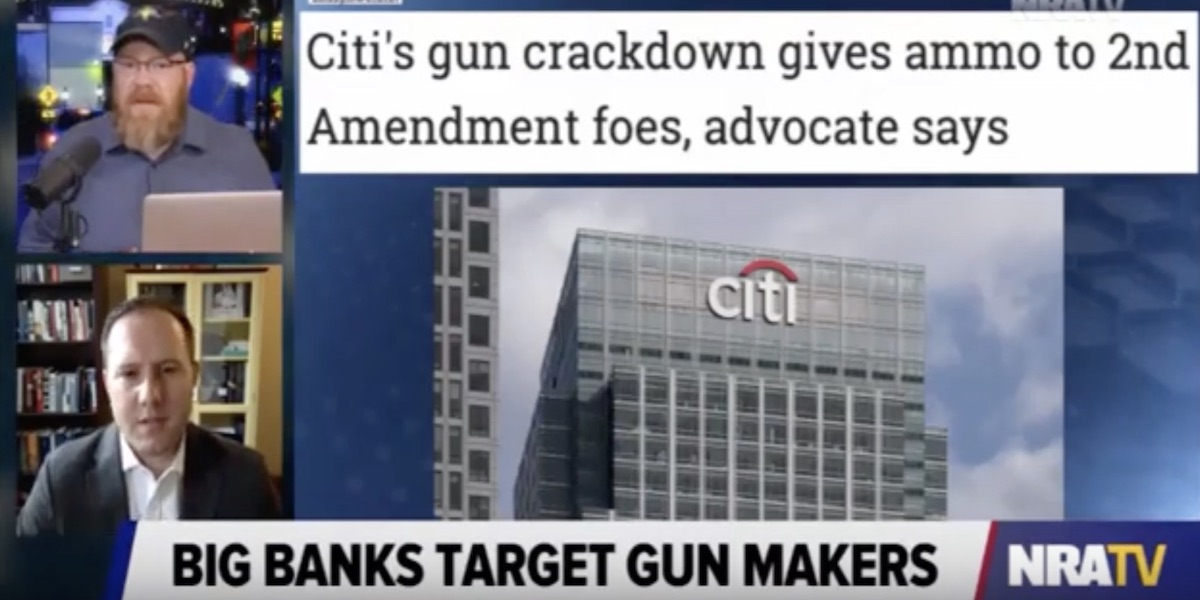 That’s the advice Justin Danhof, Esq., the National Center’s general counsel and director of its Free Enterprise Project (FEP), has for conservatives when it comes to dealing with businesses embracing liberal policies. In an interview with Cam Edwards on NRATV’s “Cam & Co,” Justin discussed the threat to Second Amendment gun rights that is posed by activism targeting the financial services industry.

Justin recently confronted Citigroup CEO Michael Corbat about the banking giant’s decision to require that the companies with which it does business have an age restriction of 21 or older for gun sales as well as not sell certain gun accessories such as high-capacity magazines at all. Edwards noted that banks can serve a “pressure point” to force policies on the gun industry above and beyond laws.

After the 2018 school shooting in Parkland, Florida, many companies – including Bank of America, United Airlines and Dick’s Sporting Goods –  either imposed restrictions regarding their business involving guns or broke ties with the National Rifle Association. These moves were championed by the left, but Edwards noted that supporters of the Second Amendment can also be “applying that free-market pressure” to safeguard their freedom.

The left does not have to be the only squeaky wheel…

If only the left is doing it, only the left if going to get results from corporate America. We need to be activists. Those on the right – wake up. Activism is for us as well!

Justin pointed out that the influence of the banking industry applies not only to commercial lending but also to policies involving personal credit card use. This could have a tremendous effect on gun rights if it does not receive proper pushback.

During his exchange with Corbat, Justin discovered that Citi had lost money due to businesses “distancing themselves from Citi” because of their gun restrictions. But Corbat defended Citi’s actions by saying the loss was “negligible.” He claimed Citi made up for the lost business through new business relationships allegedly made because of the anti-gun policies. This struck Justin as “very vague,” and something that needs more investigation. Regarding these supposed new Citi partnerships, Justin said:

When Justin pointed out to Corbat that Warren Buffett told CNBC he was against “imposing [his] views” on his employees and investors, Corbat defended Citi’s actions in a manner that implied he knew better than the “Oracle of Omaha.”

Despite his high esteem for himself, Corbat admitted that making a political decision to make Citi hostile to the Second Amendment did cause the company to lose business. There was a backlash from conservatives and constitutionalists. That’s why Justin called for more conservative shareholder activism across the business community so that the liberals aren’t the only “tail wagging the dog of corporate America.”