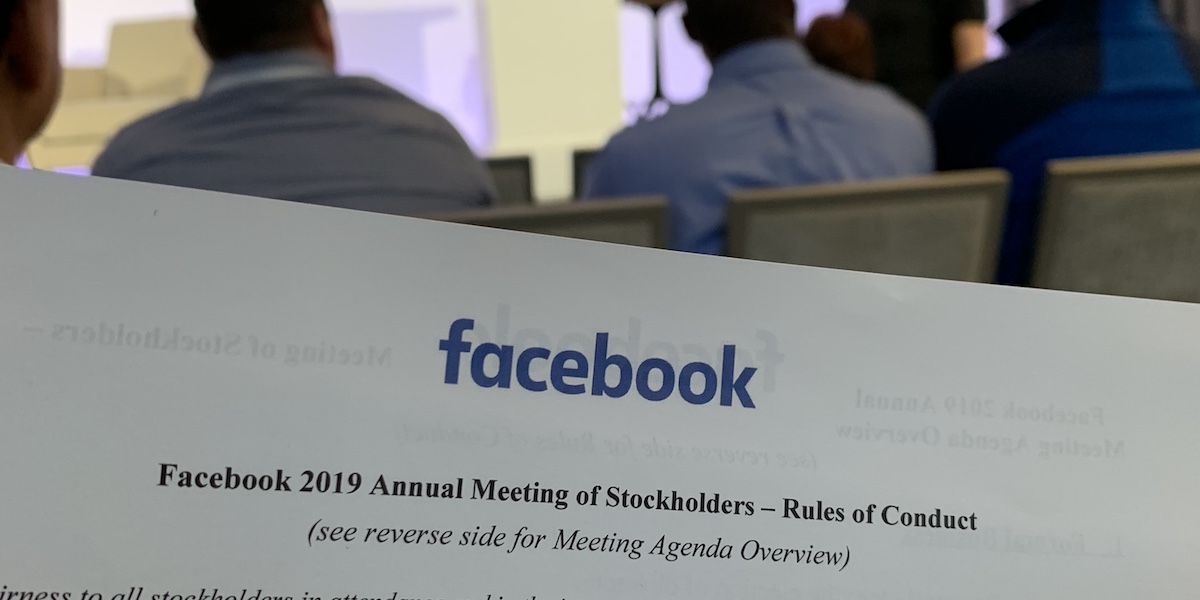 Press Release
Posted at 17:42h in Free Enterprise Project by The National Center

Menlo Park, CA/Washington, D.C. – Facebook shareholders were asked today, against the wishes of CEO Mark Zuckerberg and his corporate leadership, to consider a proposal encouraging political diversity on the social media giant’s board of directors.

The proposal was presented at Facebook’s annual investor meeting by the Free Enterprise Project (FEP), the conservative shareholder activist arm of the National Center for Public Policy Research.

“Facebook has already colluded with the left to develop a ‘diverse slate approach’ that promotes board candidates based on their race and gender. Facebook should actually value potential board members because of how they think rather than how they look,” said National Center Vice President David W. Almasi, who represented FEP at the meeting in Menlo Park, California. “Considering the liberal groupthink that dominates Silicon Valley, this is a necessary requirement for sound corporate governance.”

FEP offered proposal eight – “True Diversity Board Policy” – which can be found on page 61 of the Facebook proxy statement. The proposal asked Facebook for a “description of the specific minimum qualifications that the Board’s nominating committee believes must be met by a nominee to be on the board of directors” and a chart or other presentation of “[e]ach nominee’s skills, ideological perspectives and experience.”

While Facebook COO Sheryl Sandberg said just a year ago that “[w]e know we need more diversity at all levels at Facebook and in our industry,” the company still opposed FEP’s proposal on the argument it was “unnecessary and not beneficial to our stockholders.”

In his statement before Facebook leaders and investors, Almasi cited the National Center’s experience with declining Facebook traffic. An investigator from a law firm commissioned by Facebook to study anti-conservative bias suggested that the National Center’s position on climate change policy likely affected its ability to engage with users on a wide range of topics. Almasi also cited the comments of former Facebook senior engineer Brian Amerige, who complained on an internal company message board that Facebook is a “political monoculture that’s intolerant of different views.”

Whether you’re willing to admit there’s a bias at Facebook is beyond the point right now. In business, perception is often reality. Our proposal provides a tangible way for the company to combat its bias. When the company takes overtly political positions on legal and policy issues, it would benefit from having voices from both sides of the aisle in the room. The company would be much less likely to engage in bias against conservatives if it had a few right-leaning folks in positions of power. If their voices were heard, it would go a long way towards fixing both the actual bias and the perception of bias…

We believe that boards that incorporate diverse perspectives can think more critically and oversee corporate managers more effectively. Appointing a few conservatives may help the company avoid groupthink and address biases. That’s a win for investors and a win for true diversity.

Almasi’s full statement, as prepared for delivery, is available here. Audio of the presentation is available on the National Center’s YouTube page.

“Our proposal failed to get a majority vote, but that’s no surprise considering that Mark Zuckerberg owns more than half of the company’s voting stock all by himself,” said Almasi. “What’s important is that the company’s leaders and its investors heard loud and clear from conservatives who routinely experience bias on Facebook. And, by fighting a common sense proposal simply seeking true diversity and fairness, Facebook’s leaders are making it clear to all that they are unwilling to do anything about it.”

Later in the meeting, Almasi also asked about a charter school that was allegedly prevented from advertising a screening of the Dennis Prager/Adam Carolla documentary “No Safe Spaces” because the school would not claim a political affiliation on Facebook. Saying that it is not Facebook policy to require nonprofits to declare a political affiliation, Sandberg promised to look into the matter.

Today’s Facebook meeting marks the 24th time FEP has participated in a shareholder meeting in 2019. Support our work! Click this graphic to help FEP continue to push for corporate inclusion of conservative ideas.