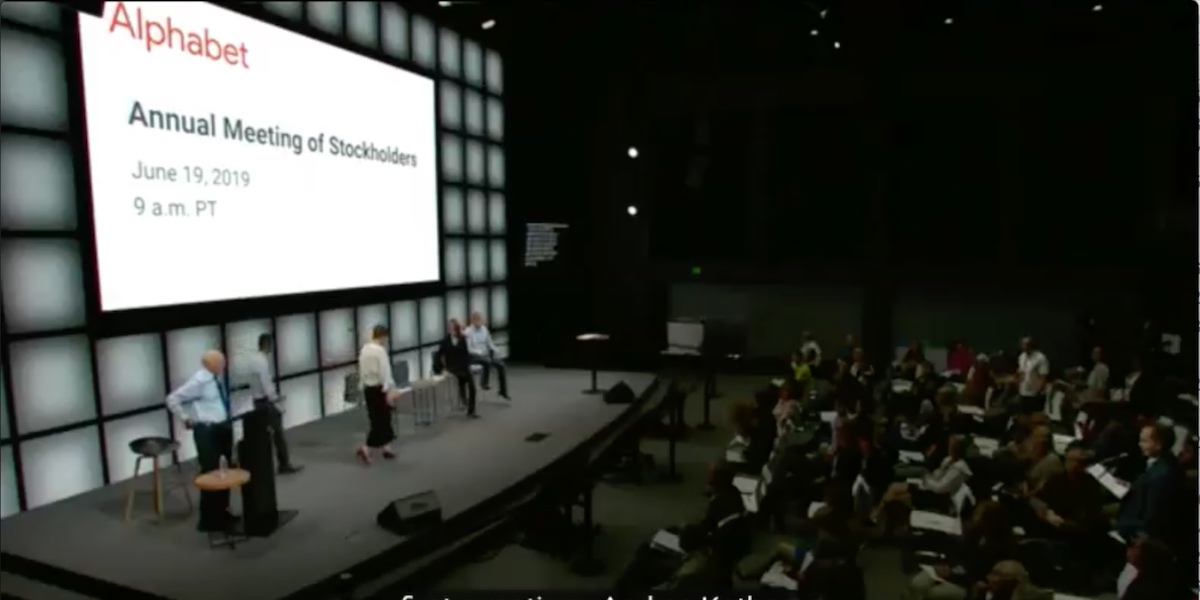 Press Release
Posted at 16:20h in Free Enterprise Project by The National Center

Sunnyvale, CA/Washington, D.C. – Google, and its parent company Alphabet, continued its campaign to silence conservative speech today when it repeatedly cut off conservative speakers at its annual shareholder meeting while allowing liberal activists to violate meeting rules and decorum with impunity.

“In nearly every way imaginable, Google works to limit conservative speech. And its attempts to silence me today, while liberal agitators were allowed unlimited time to air their progressive whining, only served to prove my point,” said Danhof.

At the meeting, Danhof said:

In April, Google ended its AI advisory board before it even got off the ground because a few close-minded Googlers objected to the inclusion of Heritage Foundation President Kay Coles James on the project. This outrage mob called James so many words that I’m not going to say in this public forum.

Regarding her experience with Google, James wrote this: “In 1961, at age 12, I was one of two-dozen black children who integrated an all-white junior high school in Richmond. White parents jeered me outside the school, and inside, their kids stuck me with pins, shoved me in the halls and pushed me down the stairs. So when the group of Google employees resorted to calling names and making false accusations because they didn’t want a conservative voice advising the company, the hostility was reminiscent of what I felt back then — that same intolerance for someone who was different from them.”

Danhof then stated, before he was rudely cut off:

Shame on Google and every single person involved in ending the A.I. board and giving in to this mob.

The company’s intolerance is staggering. From working with the racist, bigoted and discredited Southern Poverty Law Center…

After being interrupted, Danhof managed to still ask:

OK, my question is for Mr. Pichai then. Will you commit today to a course correction at this company and start promoting actual viewpoint diversity? Perhaps you could establish a public policy advisory board that includes folks such as Ms. James to help the company actually become tolerant and inclusive.

Video of Danhof’s exchange with Alphabet executives is available here.

“What did Pichai have to say in response to my question? Nothing. He sat on the stage like a potted plant with a blank stare on his face. His staff was up there to take cover for him because it would appear that Pichai has no spine,” said Danhof.

Also at today’s meeting, Alphabet attempted to cut off National Legal & Policy Center CEO Peter Flaherty as he was presenting his organization’s shareholder resolution which called out the company’s lack of viewpoint diversity.

“It’s noteworthy that the only two people, of the more than 20 outside speakers at today’s meeting, that Alphabet tried to silence were the two conservatives. Google’s disdain for conservative speech was palpable today,” said Danhof.

Today’s Alphabet meeting marks the 28th time FEP has participated in a shareholder meeting in 2019.