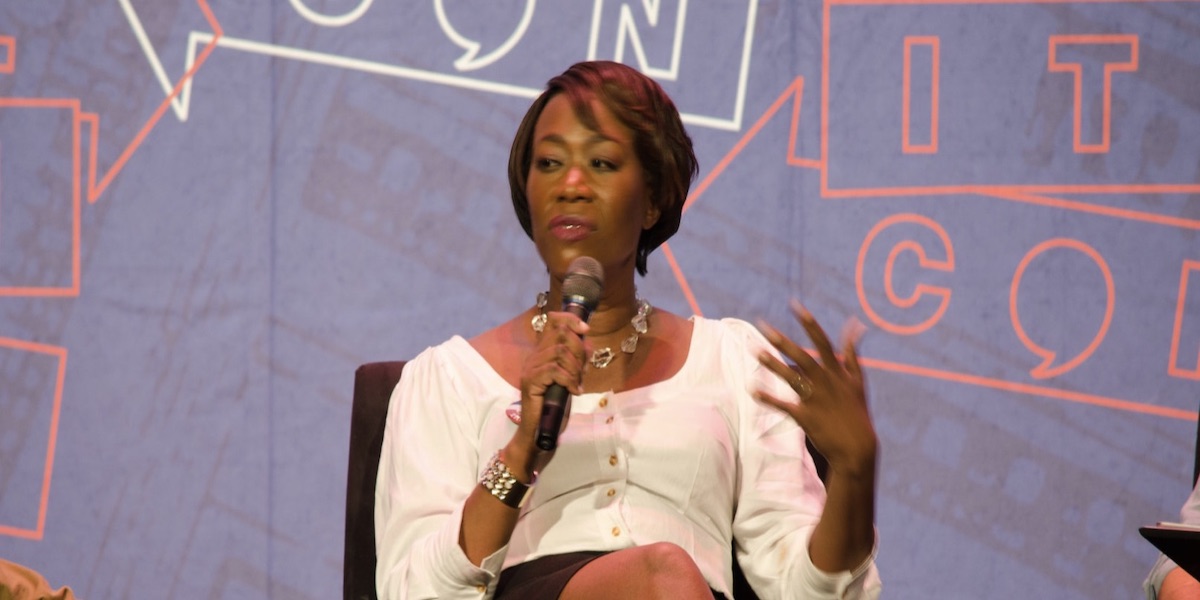 19 Sep 2019 No Joy for Reid’s Dis of Christians, Conservatives

MSNBC host Joy Reid recently warned a group of teachers that she believed “wealthy, white Christian men” are willing to create something akin to the apartheid regime of the former South African government to stop a “numerical majority” of Americans from winning in a “simple election.”

This stoking of racial fears to attack both the Electoral College and Americans of religious faith is being criticized by members of the National Center’s Project 21 black leadership network. They suggest the media personality take a civics class. And also that Reid not use her celebrity status to enlist educators in her divisiveness. In short, Reid needs to be “Raising the Barr.”

Reid’s comments were made during a panel discussion about “Civic Participation in an Age of Democratic Peril” at the “In Defense of American Democracy” conference organized by the American Federation of Teachers, Shanker Institute and Onward Together. Other notable speakers at the event were former presidential candidate Hillary Clinton, Senator Ron Wyden and former attorney general Eric Holder – all of whom have not addressed Reid’s incendiary comments.

Saying that “multiracial democracy is so fragile,” Reid claimed there is “a very determined minority, in this case wealthy, white Christian men and Christian Americans who are of the fundamentalist variety” who want to “maintain power forever” and will do so even “if they have to pull the South Africa model.” She added that “Donald Trump is merely an avatar for this.”

Reid called for “just a simple election” to “actually have majority rule in this country.”

Constitutional experts note that the Electoral College protects against a “tyranny of the majority” in which elections could effectively be determined by just a few densely-populated areas rather than through broad national support.

This is at least the second time Reid has suggested the existence of apartheid in America. In July, in response to allegations about the detention of an illegal immigrant, Reid tweeted: “This is apartheid.”

The use of the word apartheid has no place in American political discourse. It is insulting and demeaning to the millions of Americans who simply disagree with leftist political ideology. Joy Reid uses the term to deflect from the millions of women, Jews, Hispanics and blacks who support President Trump.

Reid is wrong on so many things it’s no surprise she doesn’t understand our form of government, which is a republic. We do not have, nor have we ever had, the mob rule of a simple democracy.

However, Reid is correct that our form of government is a fragile one – dependent upon a moral upright and well-educated electorate. Her contribution in this speech to the malignant campaign of misinformation echoes the garbage that she so regularly issues on her television program.

Wouldn’t it be great if, instead of making speeches, Reid enrolled in a civics class?

Dishonesty is a common tool for a leftist regime determined to prevent us from evolving into a colorless society. Its insistence in continuing this charade would be comical if its reach wasn’t so deep and its effects so dangerous.

Joy Reid talks about these boogeyman “white Christian men” as if they conspire in the darkest corners of our society and are working tirelessly to divide us. But we all know white Christian men don’t act like liberals! And they don’t need to divide us – the left is already doing that very effectively.

Reid’s unsubstantiated mistruths do a disservice to a nation that entrusts the fourth estate of journalism to behold the truths of the world and ensure an educated populace. But, like many pathetic liberals, she resorts to inventing conspiracies by white elites who are trying to oppress us. Well I just so happen to know these elites, and I can assure you they are far better company than she could ever be.

Project 21 member Donna Jackson notes that this behavior is unfortunately common for Reid:

Let’s first acknowledge that we have racist, bigoted minorities on the left in America whose goal is to create fear in exchange for power. Joy Reid is one of them.

Reid’s statement now, like Vice President Joe Biden’s 2012 assertion to a black audience that conservatives would “put you all back in chains,’’ is just another tactic to intimidate and manipulate people into supporting the liberal agenda.

And it’s clear Reid has never been afraid to express her disdain and hatred for white Americans. In a 2017 podcast interview, she suggested liberals give up on white people once and for all and focus on only minorities.

We’ve seen a lot of good things from current conservative policies – including black unemployment at a record low and black-owned businesses being launched at a healthy rate. Of course, there is much more to be done. We need solutions, not scapegoats. Joy Reid’s targeting of white Christian males will accomplish absolutely nothing.