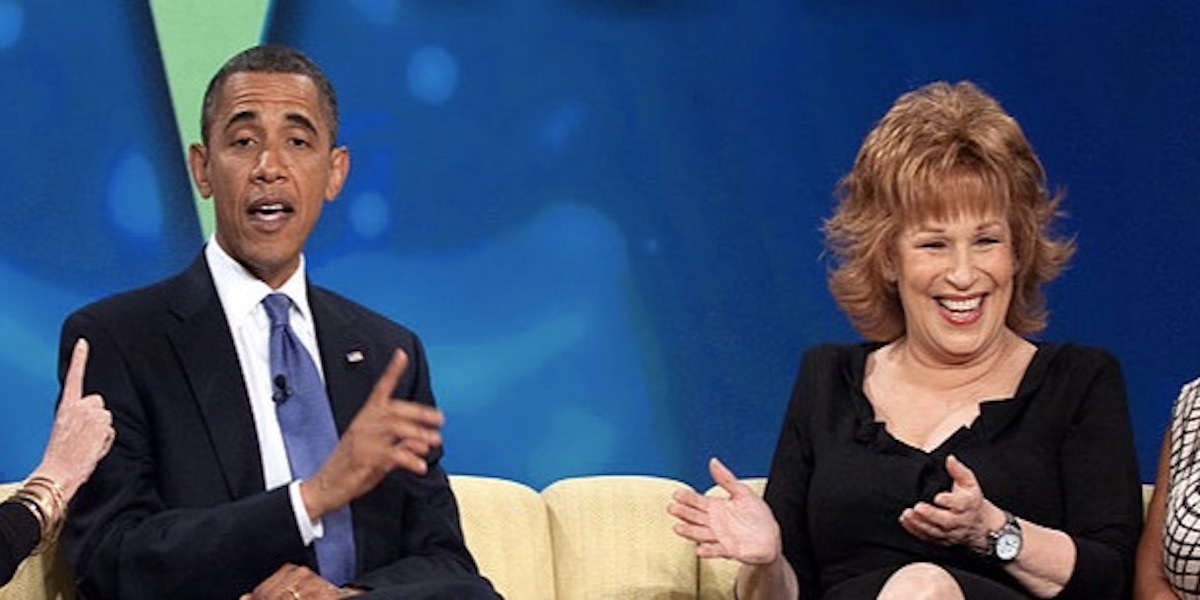 20 Oct 2019 Behar Drags Others Into Her Joyless Existence

Joy Behar, a panelist on ABC’s “The View” chat show, really has a chip on her shoulder when it comes to the Trump Administration. This mean streak is not good for her brand, and it has reflected poorly on her employer. Members of the National Center’s Project 21 black leadership network believe she needs to be “Raising the Barr” when it comes to her professionalism.

To put things in perspective, Behar once jumped into a discussion on the show in which she specifically bashed Vice President Mike Pence, his Christian faith and the sanity of all Christians by saying those who claim to hear Jesus speak must have “mental illness.” At the prompting of the National Center’s Free Enterprise Project, Disney CEO Bob Iger revealed that he had made Behar apologize to the Vice President (Disney owns the ABC network).

Just recently, and certainly not the only time, Behar questioned President Donald Trump’s sanity as well, suggesting someone should “just put him in a home” for the mentally ill instead of impeaching him. But she has also pushed for impeachment, and just this month yelled “Resign! Get Out!” at the opening of an episode of “The View.”

In her latest outlandish performance, she seemed to take pride in telling her colleagues and viewers that she argued with supporters of the President while on vacation. In England. On a tour of a historic site. Underground.

During a tour of World War II-era “war rooms” underneath London, Behar said she took on a Trump supporter whom she said had simply asked her to “give him a chance,” just as conservatives had tolerated former president Barack Obama. Her description of her retort was an exaggerated diatribe against the President: “Give him a chance? He’s destroying the planet. He’s destroying the democracy. He doesn’t know what he’s doing. He’s writing stupid letters to [Turkish President Recep Tayyip] Erdogan. He’s killing people far away from us who did nothing but help us. Give him a chance? That’s the argument you’re giving me?”

Commenting on how Behar should have relaxed on her vacation – taking a break from the 24/7 radical politicizing that always seems to get her in such hot water – Project 21 member Emery McClendon says:

The supporter asked Behar to give President Trump a chance just like we gave President Obama. That wasn’t good enough for her. Just like any average bully, she keep on badgering the supporter.

It’s time for liberals to raise the bar and leave people who are enjoying life alone. She just wanted to bash a person with a different political view than hers.

Why would Joy Behar choose to fight with a private citizen about the sitting President of the United States while vacationing in London?

I sympathize with the exasperation that the producers of “The View” and Disney executives must feel. I am sure that this is not an event worth sharing with millions of busy Americans.

And Project 21 member Richard Holt suggests that Behar’s anger comes from an inability for liberals to tolerate those who disagree with anything they believe:

Joy Behar does what liberals do best these days, and that’s go crazy at the sight of a red cap.

But it’s really a free-thinker who frightens people like Behar the most.  Every red cap, every Trump shirt and every Trump sign to them are reminders of how the liberal elite and the deep state haven’t been able to penetrate enough of society to maintain a stranglehold over everyone.

Behar’s comments really illustrate how devastating it’s been to these elites to have lost a free and fair election. That’s what really frightens them. It’s not Trump as much as the revelation that people can watch their biased media, read their biased newspapers, receive their biased education and yet somehow still not agree with them.

Behar should be angry at the sight of a Trump supporter because it’s a reminder of how little power she really has.