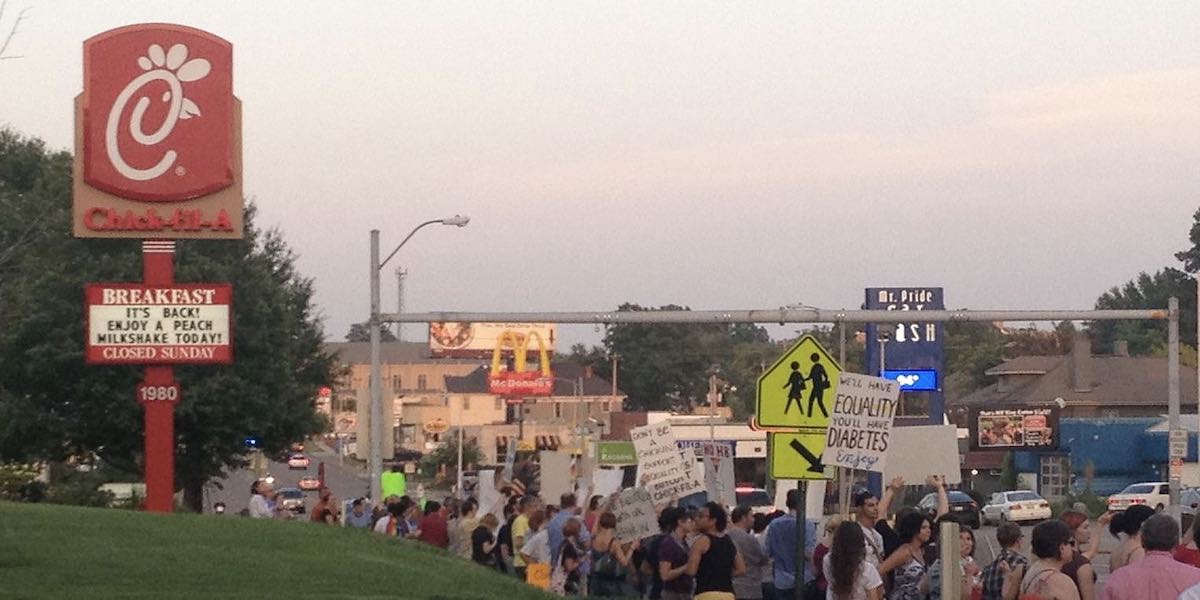 After years of protests, and loyal support from customers who celebrated the chain’s faith-based values, Chick-fil-A has given in to the social justice warriors. It will no longer give to certain charities that are targeted by the “woke” crowd.

Asserting that the chicken chain “will never gain a foothold” among those who have protested it for so many years, National Center Vice President David W. Almasi told PR Week that “[g]iving in to the social justice bullies hurts Chick-fil-A.”

Chick-fil-A President and Chief Operating Officer Tim Tassopoulos told Bisnow that “we need to be clear about who we are” as the fast-rising fast food restaurant enters new markets. It has faced challenges from liberal activists and politicians, due to the traditional Christian beliefs of its founder, in cities such as Washington, Chicago and Boston. Yet all those cities now have, or will soon have, Chick-fil-A restaurants.

Conservatives, who have supported Chick-fil-A in the past amid the protests, are angry that it will no longer support the Salvation Army and the Fellowship of Christian Athletes (FCA) – which are targets of liberal protests because they oppose same-sex marriage. Conservative pundit Allie Beth Stuckey tweeted that Chick-fil-A “abandoned the only people who were defending them against these insatiable woke wolves.” Governor Mike Huckabee, who created a movement to support the chain in 2012, tweeted that the chain “betrayed loyal customers for $$.”

With its steadfast supporters disappointed, Chick-fil-A doesn’t seem to have made any new friends. In the wake of the announcement, the left just demanded more. Gay and Lesbian Alliance Against Defamation (GLAAD) Director of Campaigns Drew Anderson said: “Chick-fil-A still lacks policies to ensure safe workplaces for LGBTQ employees and should unequivocally speak out against the anti-LGBTQ reputation that their brand represents.” He also called for “further transparency” in the chain’s dealings as a means of getting it to break any and all ties to the conservative group Focus on the Family.

Chick-fil-A has used cows as mascots for years. Some people now think chickens would be a more appropriate mascot.

To read all of the PR Week article quoting David, click here.