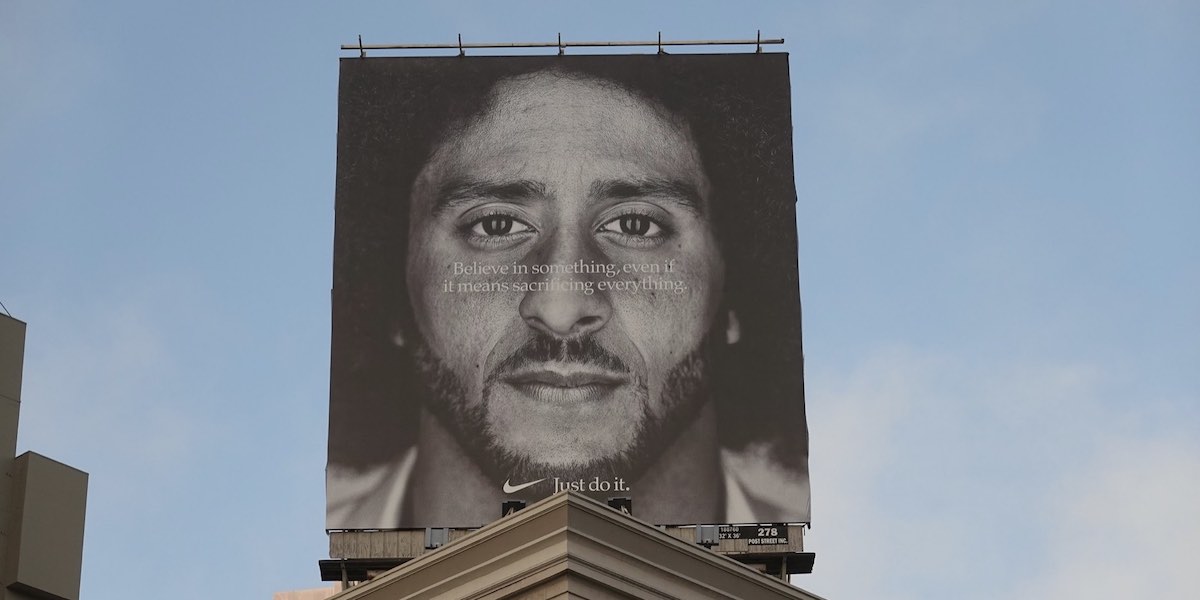 Nike pitchman and washed-up professional football quarterback Colin Kaepernick has appeared to defy yet again the narrative that’s been created for him. This time, he dispelled the assertion that he doesn’t have a beef with the American military when he tweeted that they are a “weapon… to enforce [America’s] policing and plundering of the non-white world.”

Kaepernick issued a pair of tweets this past weekend after the American airstrike that killed Iranian General Qassem Soleimani, a key figure behind the recent embassy attack in Iraq and behind several other attacks that have led to the deaths of many American servicemembers.

This latest reveal by Kaepernick shreds the image maintained in the media that he is not advocating anti-military, anti-police or anti-American sentiment through his protests. Members of the National Center’s Project 21 black leadership network are asking that Kaepernick be held to the same standard for his actions as Roseanne Barr. She was a once-celebrated member of the entertainment industry who was essentially exiled from Hollywood after making inappropriate comments about a former Obama Administration official.

Shouldn’t Kaepernick be judged by the same terms as Barr? That’s what these black conservatives believe.

Colin Kaepernick didn’t put much thought into his recent comments about our military. To equate them with war criminals or those who plunder non-white countries is to speak very ignorantly of what the job of the military encompasses. It is the job of those who serve in our military to protect American interests and combat threats to our nation.

They took appropriate action and carried out their sworn duty in the recent attack in Iraq to eliminate Iranian General Qassem Soleimani.

In my opinion, Kaepernick should be strongly rebuked and held accountable for his tweets.

In his first tweet, Kaepernick made the sweeping declaration that “[t]here is nothing new about American terrorist attacks against Black and Brown people for the expansion of American imperialism.” In the second, sent out a minute later, he added that “American militarism is a weapon wielded by American imperialism, to enforce its policing and plundering of the non white world.”

Project 21 member Rich Holt, an Army veteran, suggests Kaepernick’s complaints are rooted in animus for both the military and white people – making these tweets racially intolerant as well. Rich says:

At some point, you just have to recognize that Colin Kaepernick’s real issue is his hatred of white people. His racist narrative that spreading freedom is “plundering” the “non-white world” runs in the face of the multi-ethnic character of American civilization.

The expansion of global freedom is our moral obligation, and it is up to Americans to deliver freedom to those poor shackled souls who still toil in slavery to pontiffs, kings and general-secretaries. If Kaepernick hates the America military so much, maybe he should lead the way by joining the Peace Corps or volunteering overseas.

These tweets – in which the military is suggested to be involved in terrorism and plunder – shatter previous assertions by Kaepernick supporters that his protests are not meant to be against the military. Sports reporter Dylan Gwinn writes that “it’s hard to make a case that he’s not accusing the military of being a willing partner in what he views as a racist and imperialist empire.”

Previously, Kaepernick’s socks depicting cops as pigs undercut his advocates’ claims that his protests weren’t supposed to be insulting to police officers in general. And assertions that his kneeling during the national anthem was not to protest the American flag were disputed after Nike shelved a shoe featuring the 13-star Betsy Ross flag after Kaepernick complained.

Typically, I would leave tweets like this alone – considering that I think the bravest thing Colin Kaepernick ever did was not signing with the Chicago Cubs after the 2009 Major League Baseball draft.

I find it amusing that Kaepernick, as a paid shill for Nike, talks about the plundering of the non-white world when his own shoe is not discounted from its exorbitant price when you cross over into the hood. And was he feeling oppressed as he cashed his checks from his team and from his endorsement deals? This is hypocrisy at its finest.

Again, I ask the simple question: Had he won the quarterback competition during 2016 training camp, would he have ever been this vocal? I highly doubt it.

I will continue to believe that comparing the actions of our brave military to the plight of an athlete who lost his starting job in the highest profile position in the NFL is a joke that has zero humor. We must stop this silly prattle in its tracks as we are about to potentially sending young men and women into harm’s way.