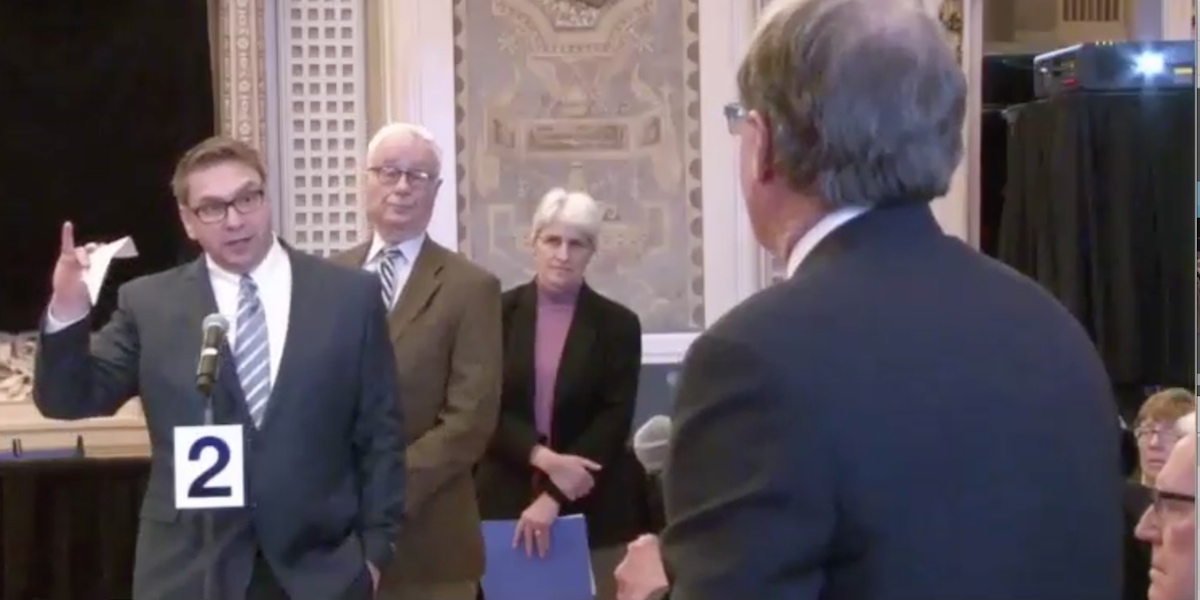 Wilmington, DE / Washington, D.C. – Walgreens executives admitted today that the company continues to financially support two left-leaning organizations lobbying for sanctuary cities for illegal immigrants, but insisted such funding is earmarked only for nonpolitical activities. This admission was made in response to a line of questioning from the National Center for Public Policy Research’s Free Enterprise Project (FEP) – which also commended the drugstore giant for responding to an FEP-submitted shareholder proposal by agreeing to include viewpoint diversity in its board member selection.

“Walgreens continues to fund organizations that lobby in favor of illegal-alien ‘sanctuary’ jurisdictions,” said FEP Coordinator Scott Shepard, who attended today’s meeting and posed questions to the company’s directors. “Walgreens assures us that these donations are solely for health care purposes, but this is an empty assurance. Once Walgreens donates to a charity, it has no legal right to direct the charity’s actions.”

Shepard appeared at today’s annual Walgreens Boots Alliance, Inc. shareholder meeting – held in Wilmington, Delaware – to follow up on promises made to FEP Director Justin Danhof at the company’s 2018 meeting. Two years ago, Danhof confronted Walgreens executives about the company’s funding of UnidosUS (formerly the National Council of La Raza) and the League of Latin American Citizens (LULAC) – both supporters of sanctuary cities and amnesty for illegal immigrants. In response, Chuck Greener – then Walgreens’s vice president for communications and community affairs – vowed to review the company’s charitable giving policies.

• Has Walgreens, as promised, reviewed its donations and its donations policy?
• If so, what was the result of that review?
• Does Walgreens still support organizations that lobby for cities to violate federal law in order to prevent deportation of illegal aliens who have committed crimes? If not, then please accept our congratulations on making a wise policy decision.
• If so, though, what is the company’s justification for continuing to run reputational risks in order to support violation of federal law, while taking a deeply partisan and highly unpopular political stance?

A full copy of Shepard’s question, as prepared for delivery, is available here.

A video of the exchange between Shepard and the company’s executives is available here.

Greener, now Walgreens’s global chief public affairs officer, responded to Shepard’s questions today by reasserting that Walgreens donates to groups such as UnidosUS and LULAC only “to help people live healthier and better lives.” He promised that Walgreens “specifically designate(s)” that funds given for the organizations’ health initiatives “cannot be used elsewhere.”

But, in 2012, Walgreens had no problem completely dropping its membership in the American Legislative Exchange Council (ALEC) even though it only worked with ALEC on its Health and Human Services Task Force. At the time, liberal agitators targeted Walgreens’s ties to ALEC over the group’s work on voter integrity safeguards, work that was seemingly unrelated to Walgreens’s participation in the organization.

After today’s meeting, Greener agreed to further discussions with FEP to ensure that Walgreens does not discriminate or act in an inappropriately partisan manner in its donations or its donation policies.

“Walgreens may say that the funds it gives to these radical groups are earmarked for specific projects, but money is fungible,” said David W. Almasi, Vice President of the National Center for Public Policy Research. “With extra money in their coffers, UnidosUS and LULAC are empowered to budget other funds for the promotion of their sanctuary city agenda. The question is whether a consumer-focused company like Walgreens wants to be tied to these groups’ unpopular and possibly even unlawful policies.”

A 2017 Harvard-Harris poll found that 80 percent of American voters opposed sanctuary city policies. According to Hans A. von Spakovsky, a senior legal fellow with the Heritage Foundation, these policies are unlawful: “8 U.S.C. §1373 prohibits states and local jurisdictions from preventing their law enforcement officials from exchanging information with federal officials on the citizenship status of individuals they have arrested or detained.”

Today’s meeting came just days after the U.S. Supreme Court ruled in favor of President Donald Trump’s “public charge” rule for illegal aliens. This rule, having antecedents as far back as the days of colonial America, makes foreign residents wishing to obtain permanent residency in the United States responsible for providing a net contribution to the American economy rather than drawing net government benefits .

“The Supreme Court ruling will increase federal opportunities to limit immigration in sensible ways, and will therefore draw vociferous criticism from those who reject the government’s right to control its borders and its immigration,” said Shepard. “We expect public resistance to sanctuary cities to grow. It’s a particularly bad time for good companies like Walgreens to be involved with supporters of such illegal and unpopular activism.”

During today’s meeting, Shepard also thanked the Walgreens leadership for agreeing to implement a policy tied to a shareholder proposal FEP submitted to the company. The “True Diversity Board Policy” proposal would have required the company to explain its minimum qualifications for board nominations and the qualifications of it nominees. Arguing that “[t]rue diversity comes from diversity of thought,” such a policy is designed to stop boardroom groupthink that could be a major risk for shareholders. Click this image to support our work to hold corporations accountable!