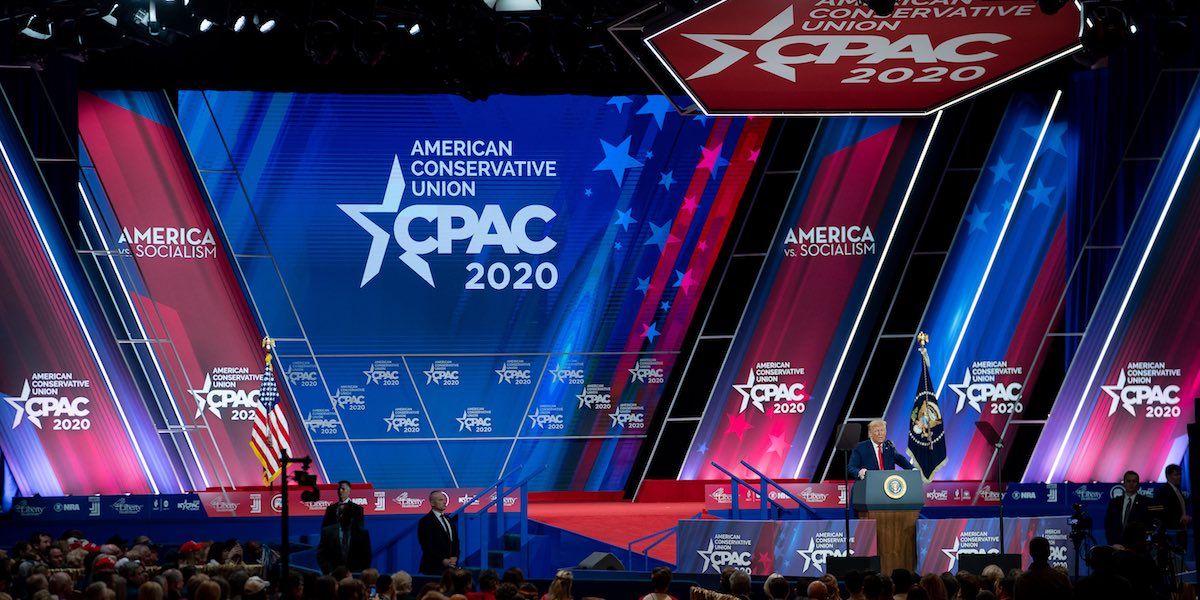 ConservativeBlog.org
Posted at 20:45h in Blog, Environment and Enterprise Institute by David Almasi

While the theme of this year’s Conservative Political Action Conference (CPAC) was “America vs. Socialism,” its organizers catered to groups that claim to be conservative yet seem to have ties to monied interests that want environmental regulations deeply rooted in socialist doctrine.

In the exhibit hall and even among the CPAC panels, groups that freelance writer Kevin Mooney labels as “eco-Right” were very visible. And while the goal of CPAC 2020 was to make it clear that the differences between right and left have never been clearer, Mooney says about these CPAC sponsors:

Their calls for big-government solutions to address the claimed effects of climate change smack of left-of-center environmental activism and have little in common with limited government, free market, or constitutional conservativism. And their connections with and funding from left-wing sources reinforces this suspicion.

At CPAC 2020, Young Conservatives for Carbon Dividends (YCCD) and RepublicEn sought to make a case to attendees for carbon taxes as a panacea for climate concerns.

But in Mooney’s investigative article for the Capital Research Center’s “Green Watch” magazine, National Center Senior Fellow Bonner Cohen, Ph.D. explains that there are harmful economic and national security implications to the agenda being touted by these allegedly conservative groups:

If you are a rival of the United States in China, Russia, or Iran, this is a dream come true. The young people who have joined the YCCD have been thoroughly coned, and once the group’s [IRS Form] 1099s become available, it will be fascinating to see by whom.

CPAC is organized by the American Conservative Union (ACU). While ACU Chairman Matt Schlapp told Mooney that his organization is against a carbon tax, “[w]e don’t mandate that everyone here at CPAC has the same views.” But that didn’t stop the ACU from pointedly disinviting Senator Mitt Romney and kicking out activist Gavin McInnes from this year’s events due to apparent political disagreements. Also, as Mooney points out, as a perk for sponsorship, CPAC helped at least one of these groups with a post-conference email blast:

CPAC sent out an email with the subject “Solve climate change with common sense, not hysteria” inviting recipients to join RepublicEn and the #EcoRight movement.

YCCD founder Kiera O’Brien told Mooney that the carbon tax, or “dividend,” for which YCCD advocated at CPAC is a conservative idea because it “place[s] a price on carbon with the support of business and give[s] quarterly dividends back to the public.”

The group assumes, without citing any supporting evidence, that global temperatures will rise to the point that ‘action’ will have to be taken. After accepting the unsupported premise of the alarmists, it then moves on to its solution, which it calls carbon dividends. But this is really a massive wealth-redistribution scheme that will have no effect whatever on the climate but will tax the fossil-fuel industry and the infrastructure that supports it out of existence, leaving the country dependent on intermittent and unaffordable renewable energy for its electricity and transportation fuel.

Despite their boasts of conservative underpinnings, both YCCD and RepublicEn have links to left-wing groups and funders. Mooney reports that the former is linked to Students for Carbon Dividends, which has ties to the Climate Leadership Council – a group receiving millions of dollars from left-wing benefactors John and Laura Arnold. The latter is said to be “closely tied” to the liberal Citizen’s Climate Lobby and is also the recipient of millions in donations from left-wing donors.

To literally add insult to injury to CPAC’s well-cultivated reputation as a place to see the conservative movement’s “best and brightest leaders,” RepublicEn representative Alex Bozmoski was allowed to engage in “personal attacks” against fellow panelists and challenge their research during this year’s events.