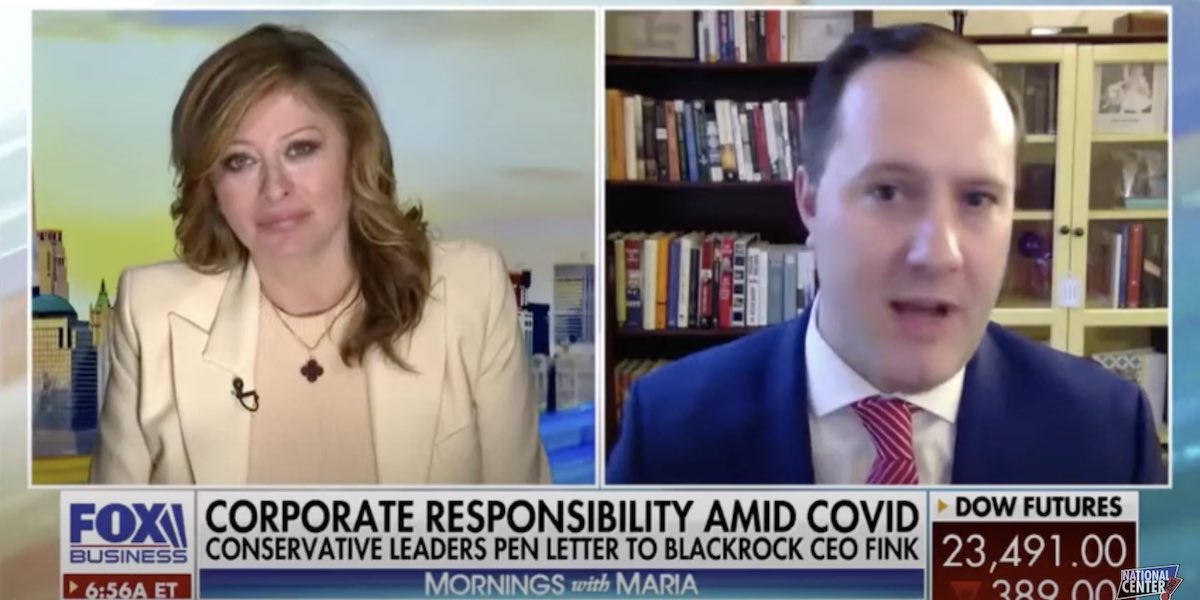 Members of the National Center staff and over 70 other conservative leaders and elected officials have signed onto an open letter to BlackRock CEO Larry Fink that asks him to “reconsider” his decision that the investment management service he leads “will operate under a ‘stakeholder’ model rather than the well-established ‘shareholder’ primacy model” as early as this year.

In explaining the importance of calling Fink on his decision, Justin said:

So we see them putting pork that’s unrelated to recovery into recovery bills… This same thing is happening in the corporate arena, where the liberal activists that file over 400 shareholder resolutions annually are pushing these environmental, social and governance issues onto corporations that add an extra cost of doing business.

And Larry Fink, the CEO of BlackRock, has indicated that, in 2020, he’s gonna start supporting many of these resolutions. And as the largest asset manager in the world, that’s very concerning to us as a coalition.

We have decided to send Mr. Fink a letter and say we think it’s time you reconsider.

Noting that acceding to liberal activists’ political agendas would “add an extra-regulatory cost on these companies requiring them to spend their shareholder capital” and “may harm everyday Americans who are invested in these companies through pension funds and retirement plans,” the letter also points out:

Free market capitalism has lifted more people out of poverty than any economic system in world history. That’s because, at its simplest level, capitalism operates under the basic rule that all exchanges are voluntary. Therefore, to achieve wealth and create growth in a capitalist system, one must appeal to the self-interest of others.

Should BlackRock and other companies continue focusing on “highly politicized trends and fads” during this economic crisis, this strategy could “exacerbate instability, when instability can least be tolerated.”

People who share the coalition’s concerns can add their name to the letter by clicking here.

Justin provided a few instances to Bartiromo where corporate America is putting political wants ahead of employee and investor needs:

At this time, should Marriott – for example – be putting solar panels on the roofs of their hotels that are empty, as their headquarters is also empty, because most of their employees are furloughed? We don’t think that’s a wise use of finite resources. We think they should be paying for their employees’ health care and, when it’s safe, bringing as many of them back as possible. Right?

You just talked about Bank of America in a prior segment. Should Bank of America be spending their finite resources reallocating their funds to match Greenpeace’s desires and divest from fossil fuels or match Michael Bloomberg’s desire and not work with gun manufacturers?

To read the entire letter and see all of its signers, click here.