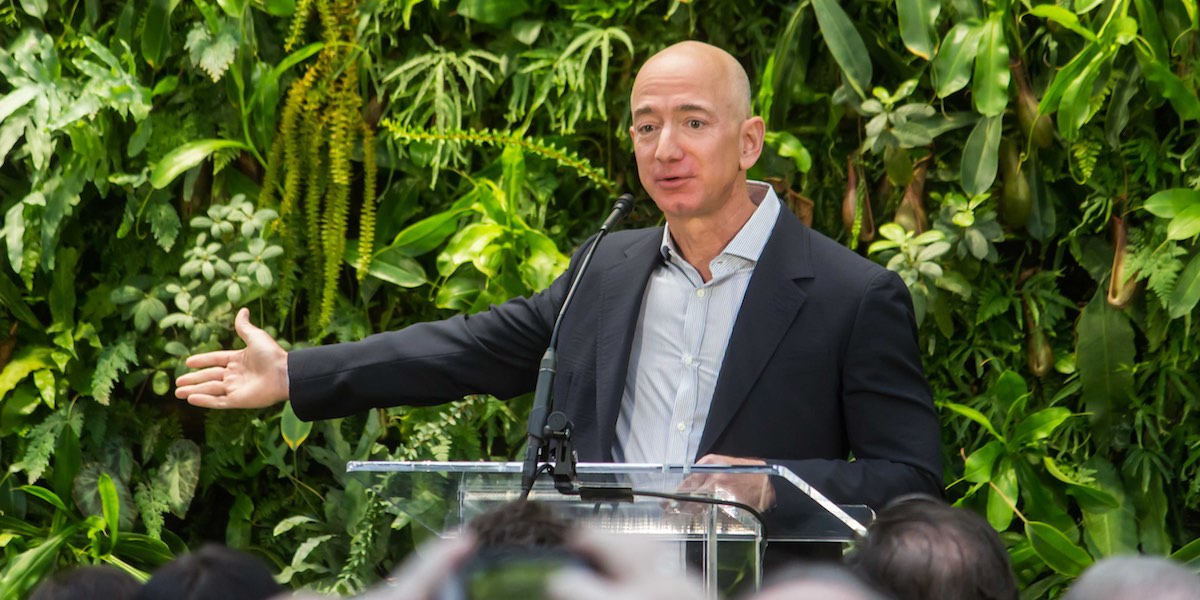 Press Release
Posted at 14:15h in Free Enterprise Project by The National Center

Seattle, WA/Washington, D.C. – Amazon’s board of directors pushed investors at today’s annual shareholder meeting to reject a Free Enterprise Project (FEP) proposal that sought to end the company’s practice of viewpoint discrimination against conservative and Christian organizations within the AmazonSmile charitable giving program.

“Amazon consistently brags about its commitment to ‘diversity and inclusion,’ but I don’t think its board of directors knows what that means. By relying on the SPLC to decide which charities are eligible to receive donations through AmazonSmile, the company is expressing public and open hostility toward conservative and religious organizations,” said Justin Danhof, Esq., General Counsel and FEP Director at the National Center for Public Policy Research, who submitted the proposal. “That’s viewpoint discrimination and it’s abhorrent.”

In the proposal, Danhof noted:

We are also concerned that the Company’s failure to respect diverse social, political, and religious viewpoints in the Smile program is symptomatic of a tendency to discriminate against such views more broadly. For example, although Amazon’s policies state “we provide our customers with access to a variety of viewpoints, including books that some customers may find objectionable,” it has recently begun removing books based on customer objections. And, while Amazon publicly affirms its commitment to different perspectives, it officially opposed a shareholder proposal to gauge progress in ideological diversity on the Board of Directors in its 2019 proxy materials.

The shareholders should be aware of the extent to which discrimination against social, political, or religious views by Amazon in its partnerships, content policies, and options for customer-selected charitable donations may jeopardize Amazon’s current market-dominance and may negatively affect important social dynamics beyond Amazon’s immediate business impact.

The full proposal and Amazon’s response to it are available on pages 41-43 of company’s proxy statement.

In presenting the proposal, Danhof stated:

Amazon allows the SPLC to pick and choose which charities are eligible for the Smile program. Why? The extreme leftists at the SPLC use this power to exclude groups that it disagrees with ideologically, while it, in turn, reaps tremendous windfall from the Smile program. This is wildly hypocritical and calls into question Amazon’s poor governance controls.

Audio of Danhof’s presentation can be heard here. A written, annotated version of Danhof’s statement can be found here.

During the meeting, Danhof and other conservative shareholders repeatedly questioned Amazon CEO Jeff Bezos as to why the company engages in such blatant viewpoint discrimination. Bezos refused to address their questions.

“If Bezos can defend Amazon’s outright bigotry, then we invite him to do so,” said Danhof. “It’s pathetic that one of the most powerful men in the world can’t answer a simple question. Yet it is also telling that Bezos seems to have zero defense for this deplorable behavior.”

Earlier this month, Danhof penned an article published by Breitbart in which he noted:

Today the SPLC is known mostly for publishing an annual “hate map,” which it claims is a census of the hate groups operating within the United States. In reality, this cynical yearly exercise is little more than a public listing of SPLC’s political enemies.

How else can one explain SPLC categorizing groups such as the Family Research Council and Alliance Defending Freedom (ADF) with the Ku Klux Klan? ADF is the nation’s preeminent legal advocate for religious liberty. Litigating to advance the principles espoused by America’s founders and enshrined in the U.S. Constitution, ADF has scored 10 victories at the United States Supreme Court since 2011. What exactly have the racists at the Ku Klux Klan done in that timeframe?

Everyone knows the Klan is a hate group. What the SPLC is trying to do is convince gullible leftists that conservative and religious organizations are morally equivalent to the KKK. It’s reprehensible and it’s fake news. And Amazon’s partnership lends a corporate veneer of credibility that only perpetuates this false narrative.

Conservative investors can learn how to support proposals that align with their values and how to vote down leftist resolutions by downloading FEP’s Investor Value Voter Guide. A thorough discussion of the resolution presented today to Amazon starts on page 52 of the guide.

Conservative Americans and people of faith can also sign a petition protesting Amazon’s collusion with the SPLC.

Today’s Amazon meeting marks the 21st time FEP has participated in a shareholder meeting in 2020.