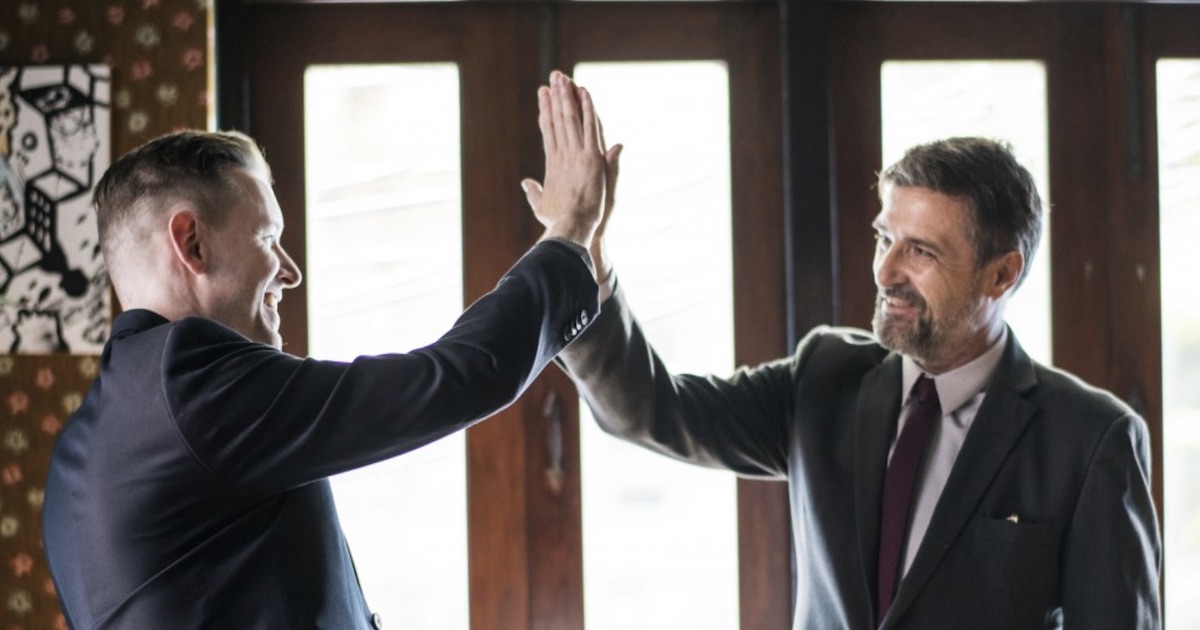 That’s the message the National Center’s Scott Shepard has for CEOs and other business leaders who’ve failed to put aside their own “privilege” when buying into the Black Lives Matter (BLM) movement.

Despite making “active financial and rhetorical contributions” at the expense of shareholder profit and employee welfare, it would seem that these corporate titans are more interested in ordering others around (naturally!) instead of taking some of their own medicine.

In a Townhall commentary, Scott – the deputy director of the Free Enterprise Project – points out that executives have painted themselves into a corner by signing onto the BLM agenda. But just talking the talk doesn’t cut it – they need to walk the walk!

It’s a problem of their own design. In hastily embracing radical racial chic in an obviously desperate play for relevance, corporate America has displayed its ignorance:

There is no principle in the notion or theory of privilege that limits its application to the racial sphere. Privilege – and the need to redress it – must arise from class and wealth as well. This “stacking” of privileged or victimized status is in fact at the very heart of “intersectional” theory, which both buttresses and accompanies privilege theory.

So… what now? How can c-suites get street cred?

Scott dishes out some harsh reality to the suits:

[I]f they really do buy into the theories of privilege and the need for compensation, along with the necessarily concomitant theories of collective and intergenerational guilt that are necessary to offer the white privilege/supremacy/fragility triad even the patina of coherence, they must agree that they and their descendants have the most for which to account.

And there’s no limit to what one must denounce after bending a knee to the radicals. In order to truly be woke, here’s what Scott believes they must do:

If these CEOs are honest and serious about their support for BLM and its allies and principles, then we should look for them to renounce, for themselves and their posterity, their positions of power, influence  – and yes, privilege – with just as much publicity and performative vigor as they employed in making their initial supportive commitments. Look for them to consign themselves, their family and their progeny to positions as manual laborers, social workers and retail workers, with the salaries and influence that append to those positions. Only then can they – the most intersectionally privileged of us all – properly and fully make restitution for their surfeit of good luck and good fortune (because, after all, individual responsibility and accountability, and all that follow from them, have been renounced by the movements and theories that they have espoused).

Notably, however, it appears that none of these loudly woke corporate leaders have taken this obvious and requisite next step. This raises the suspicion that they didn’t really mean their pronouncements after all. Or, more exactly, it raises the suspicion that they didn’t mean the notions and theories of Woke that they have so lavishly embraced to apply to them and theirs. Rather, they performed their wokeness as a way of buying off the leftwing mobs, secure in the expectation that they are wealthy enough and of high enough status that whatever damage they inflicted by supporting notions of intergenerational race guilt and the negation of personal responsibility, it would never have any meaningful effect on them and theirs.

In other words, they bargained our futures for their personal and familial benefit.

To read all of Scott’s Townhall commentary – “How Woke CEOs Traded Our Future for BLM Approval” – click here. ConservativeBlog.org / December 2, 2020
With promising medical advances on the horizon in the war against COVID-19, it would appear the biggest problem is getting liberals to trust and support …
READ MORE

ConservativeBlog.org / December 1, 2020
In a call for election reforms and a more thorough investigation of the recent election’s results, Project 21 member Emery McClendon suggests there are “too …
READ MORE

Hypocrisy at Its Finest: The Left Poses as Democracy’s Watchdog

ConservativeBlog.org / December 1, 2020
It doesn’t take a genius to see the growing trend of censorship of conservatives by the social media giants. The Media Research Center recently released …
READ MORE
The National Center for Public Policy Research is a communications and research foundation supportive of a strong national defense and dedicated to providing free market solutions to today’s public policy problems. We believe that the principles of a free market, individual liberty and personal responsibility provide the greatest hope for meeting the challenges facing America in the 21st century.
Learn More About Us
Subscribe to Our Updates