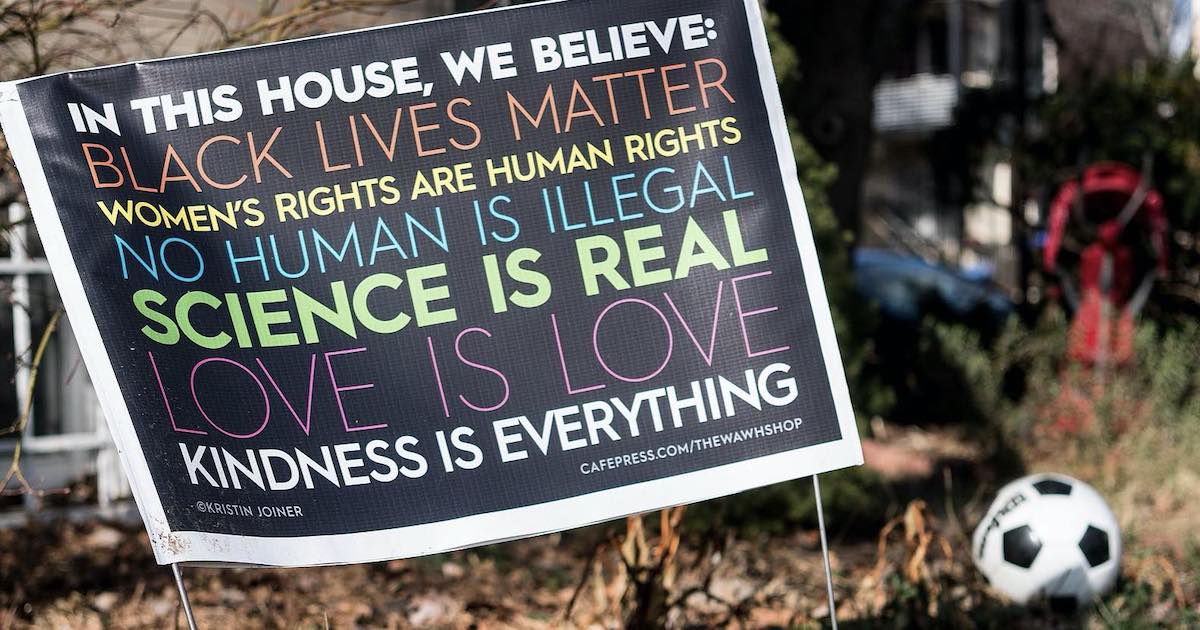 It’s now popular for politicians to dodge complicated issues – particularly involving COVID-19 and climate change – by brushing off vigorous debate with the assertion that they “follow the science.”

But this vaguery is not reserved for the campaign trail. As the National Center’s Scott Shepard reports in a Townhall commentary, he’s in the market for a house in a quiet neighborhood that’s devoid of virtue-signaling yard signs that declare – among other things – that love is love, black lives matter and science is real.

In his commentary, Scott notes that the “science is real” slogan presents a three-pronged problem:

It’s the latter aspect of this sort of sloganeering that actually threatens the practice of science. Scott says this attitude implies that the owner of the yard sign thinks “[w]e [can] wrap whatever we believe in the mantle of science and use our empty declaration of scienticity to beat our opponents into submission.”

This creates a clear and present danger to open and fair policy discussion:

For the record, it is not clear how many members of the smug squads fully recognize that they are perverting the very meaning of science in their eagerness to render their personal policy preferences both inviolable and mandatory. Many may simply lack sufficient schooling, thoughtfulness, or native ratiocinative capacity to realize that science doesn’t work anything like the way they think it does.

Some leaders of the movements that misuse the whole idea of science so casually surely know full well what they’re doing, and some may even understand the great dangers they run by destroying the casual public understanding of what science is and how it works.

But for them, comprehensive power is the sole motive, and any useful means fully sufficient to their end.

One implication of how science works is that it can never directly dictate public policy. All it can do is provide facts upon which policy judgments should be based. And even these facts seldom look like the “science” signalers appear to think they do.

Scott explains that “[t]he facts that science can provide are… not dead-certain facts.” Scientists are expected to make judgment calls, and different modeling will inevitably produce different results:

If a selection is made between these different models on the basis of any nonscientific reason, most particularly any reason related to one’s preferences and desires, however manifested, then anything that comes after that selection is no longer just science, but science + preference. That recognition is vital in the realm of public policy, because everything in public policy implicates independent value judgments that are themselves simply not amenable to scientific analysis

Scott notes that true “‘[s]cience’ doesn’t demand anything” and “doesn’t have a political agenda.” Those who scream it does, or declare so through a sign in front of their house, are “uninformed or unprincipled.”

To read all of Scott’s commentary – “Science is Real – But They’re Doing it Wrong” – click here to be transported to the Townhall website. March 5, 2021
A right to work without being forced to join a labor union is on the chopping block. The Biden Administration and liberal lawmakers on Capitol …
READ MORE

“Multiracial Whiteness” Gives The Game Away — Why Are Corporations Still Playing?

Free Enterprise Project Commentaries / March 4, 2021
Just as the new administration was installed, the latest idea burst from the fetid corner of the academy whence so much modern evil springs: “multiracial …
READ MORE

Biden Needs to Get Ruff With China on Pet Safety

ConservativeBlog.org / March 4, 2021
“Now China’s coming for our pets.” That’s the warning that National Center Senior Fellow Horace Cooper spells out in a Newsmax commentary about the threat …
READ MORE
The National Center for Public Policy Research is a communications and research foundation supportive of a strong national defense and dedicated to providing free market solutions to today’s public policy problems. We believe that the principles of a free market, individual liberty and personal responsibility provide the greatest hope for meeting the challenges facing America in the 21st century.
Learn More About Us
Subscribe to Our Updates