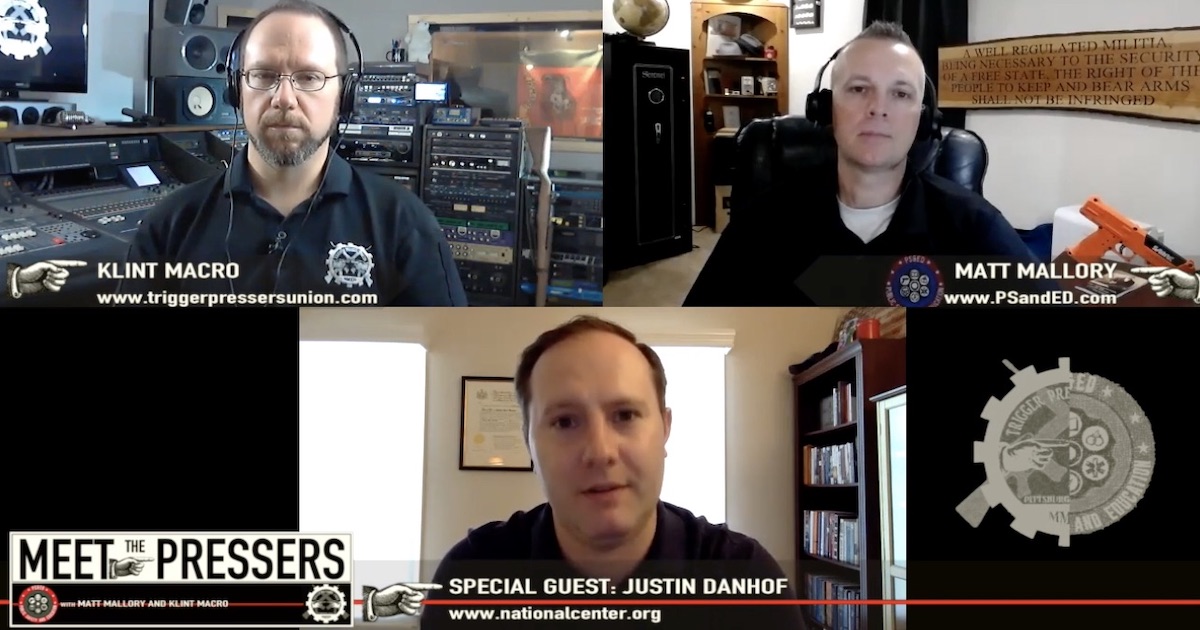 When the National Center’s Free Enterprise Project (FEP) was founded, there was pushback within the conservative movement about shareholder activism.

People would ask why conservatives should be questioning the actions of American businesses and – by extension – the free-market system that has made America so successful. The answer was easy then, and it is unflinchingly apparent now.

In an interview with Klint Macro and Matt Mallory of “Meet the Pressers,” FEP Director Justin Danhof, Esq. pointed out that the left is now using American businesses to attack speech, guns, religion and life in such a way that our “traditional liberties [are] being offended.”

Justin asked: “How many more sensibilities can they offend before we say something?”

As an advocate for gun owners, Macro admitted that he has experienced “corporate censorship” in his work – finding impediments set up in the businesses community that have restricted his social media footprint, blocked his access to certain technologies and reduced his banking options. And this hardship was all because he wanted to “exercise a constitutional right.”

Justin affirmed Macro’s suspicion that the left’s dealings with corporate America are “about silencing you.” Left-wing activists have realized that having businesses in their corner means “you don’t need to change a law to change the culture.”

When the National Center put FEP together, “no one on the conservative side was doing this.” Justin explained:

We realized there was a whole slew of liberal activist organizations that were engaged in shareholder activism. They were buying up stock in these companies so they had a voice in the room to pressure them on whatever their pet issue was.

Conservatives cannot ignore what’s happening. To do so risks corporate America becoming as “woke” and as destructive as colleges campuses are today.

And that’s why conservatives and people of faith cannot simply threaten to boycott or similarly withdraw themselves from the fight. “The left wins by engagement,” Justin noted.

Thankfully, more conservatives are beginning to realize the severity of the problem:

I think folks are starting to see, at least, all the bad actors… [But] they don’t really know what to do about it.

It can be as simple as speaking up.

Lots of people own stock. Not as many realize the power that their investments give them. Justin provided a few examples of how people can get involved in bringing corporate politics back to neutral:

This last part is the least-realized part of the three-front approach that leftists have used in their current occupation of corporate America:

Justin reiterated that conservatives need to be engaged if they want companies to even consider their positions and values:

You think every Gatorade employee is happy that the company donated to the Marxist Black Lives Matter organization? I’m guessing not. But did any of the conservative employees who are offended by that say anything? Probably not.

Managers need to hear from both sides.

That’s why FEP is on the ground – filing resolutions, attending shareholder meetings, talking with corporate leaders and employees and educating the public about what is happening and what they can do. Justin mentioned a few of FEP’s corporate skirmishes during the interview, including:

Engagement with corporate America is key, and it’s where conservatives need to change their habits and prepare to operate in uncomfortable territory. But it’s important, because everything they hold dear is at stake.

March 5, 2021
A right to work without being forced to join a labor union is on the chopping block. The Biden Administration and liberal lawmakers on Capitol …
READ MORE

“Multiracial Whiteness” Gives The Game Away — Why Are Corporations Still Playing?

Free Enterprise Project Commentaries / March 4, 2021
Just as the new administration was installed, the latest idea burst from the fetid corner of the academy whence so much modern evil springs: “multiracial …
READ MORE

Biden Needs to Get Ruff With China on Pet Safety

ConservativeBlog.org / March 4, 2021
“Now China’s coming for our pets.” That’s the warning that National Center Senior Fellow Horace Cooper spells out in a Newsmax commentary about the threat …
READ MORE
The National Center for Public Policy Research is a communications and research foundation supportive of a strong national defense and dedicated to providing free market solutions to today’s public policy problems. We believe that the principles of a free market, individual liberty and personal responsibility provide the greatest hope for meeting the challenges facing America in the 21st century.
Learn More About Us
Subscribe to Our Updates