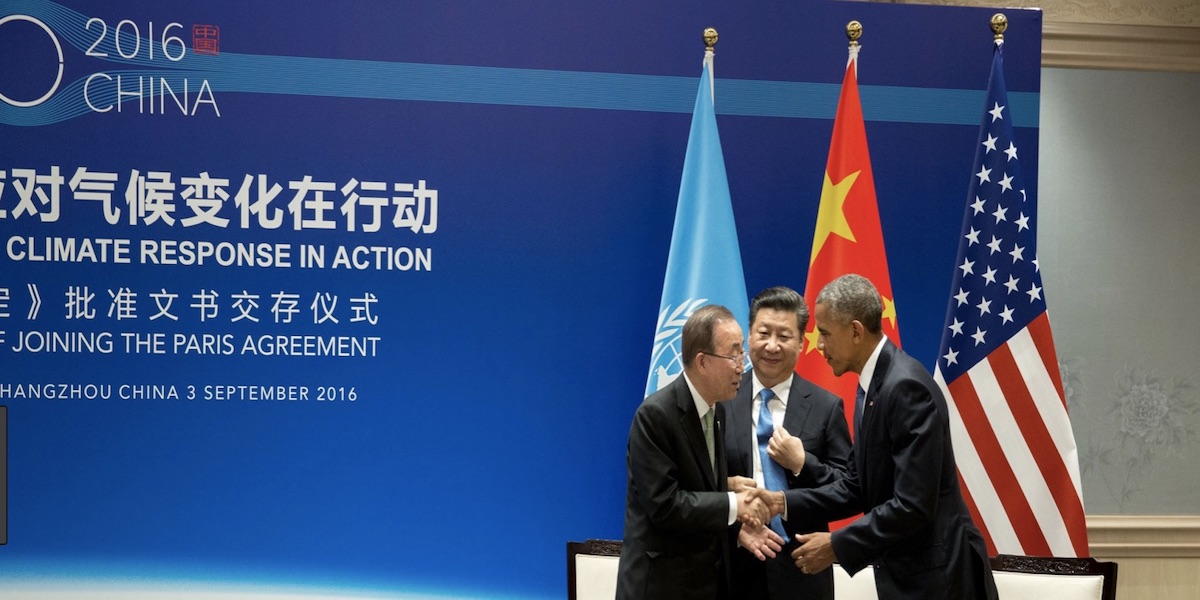 As European countries ponder the reimposition of lockdowns and other drastic measures to confront a second wave of COVID-19, and U.S. officials fear a similar outbreak on this side of the Atlantic, China—where the pandemic originated—has decided to change the subject to climate change.

On Oct. 19, Beijing’s Foreign Affairs Ministry issued a broadside against U.S. climate policies, saying that under President Donald Trump, the United States “is widely viewed as a consensus-breaker and a troublemaker.” Pointing to Trump’s “negative stance” and “retrogression on climate change,” a Foreign Affairs Ministry fact sheet stated Washington’s forthcoming formal withdrawal from the Paris Climate Accord “has seriously undermined the fairness, efficiency, and effectiveness of global environmental governance.”

The fact sheet further condemns the United States for failing to pay its share to the Green Climate Fund, an U.N.-sponsored financial mechanism established in 2010 to assist developing countries in adaptation and mitigation practices to counter climate change. Beijing says the United States accounts for 95.7 percent of international arrears to the fund.

Burnishing China’s own climate credentials, Chinese leader Xi Jinping told the United Nations in September that China’s carbon emissions will peak in 2030 and that the country will strive for carbon neutrality by 2060. China—the world’s biggest emitter of greenhouse gases—plans to transition from coal, the country’s dominant energy source, to increased reliance on renewable energy, primarily wind and solar, though how this is to be accomplished remains unclear.

Beijing’s attack on U.S. environmental policies comes in the wake of the State Department issuing its own report, “China’s Environmental Abuses Fact Sheet.”

The Sept. 25 document states that Beijing “threatens the global economy and global health by unsustainably exploiting natural resources and exporting its willful disregard for the environment through its One Belt One Road Initiative.”

At first glance, China’s sudden embrace of environmental stewardship would seem little more than a tit-for-tat response to Washington’s harsh criticism of Beijing’s environmental record. But that may be only part of the story.

Beijing has good reason to divert attention from the way it handled COVID-19 in the initial phase of the coronavirus’s outbreak earlier in the year by presenting itself now as a responsible guardian of the climate.

With a view toward a possible Biden administration come January, China has an interest in encouraging the United States to rejoin the Paris Climate Accord, which put strict limits on U.S. fossil-fuel emissions.

Xi, it will be recalled, signed an agreement with President Barack Obama in November 2014 in which China and the United States pledged mutual cooperation in addressing climate change. Under the agreement, China made no specific commitments, and the document, hailed as “landmark” at the time, soon disappeared from public consciousness.

But the precedent of U.S.–Chinese cooperation on climate—empty though it may have been—was set and could provide an opportunity for Beijing and a new administration in Washington to pick up where Obama and Xi left off.

If the Chinese Communist Party follows through on Xi’s U.N. speech, China’s goal of carbon neutrality by 2060 would parallel a similar move in the United States under a Biden administration. Chinese purveyors of wind and solar power, like their American counterparts, are eager to cash in on government-directed policies that favor their industry.

And in both countries, the transition from fossil fuels to renewables will be wrenching. The Wall Street Journal on Oct. 23 reported that Citigroup analysts estimate China would need to use more than 12 times more solar power—and more than seven times more wind energy—to become carbon neutral by 2060, requiring $6.2 trillion (in current dollars) of investment over 40 years.

China has become the world’s largest automobile market, with Beijing determined to make the country a manufacturing hub for what are advertised as “climate-friendly” electric vehicles. Tesla has recently announced it will start exporting its China-made Model 3 to some European countries.

Partnerships of another kind could facilitate U.S.–Chinese cooperation on climate under a new administration in Washington.

As noted by the U.S. House Natural Resources Committee in 2018, the government in Beijing has a long-standing friendly relationship with the New York City-based Natural Resources Defense Council (NRDC). While condemning the Trump administration’s withdrawal from the Paris Climate Accord, NRDC has been conspicuously silent, for example, on China’s environmentally destructive island reclamation campaign in the South China Sea, which, among other things, has severely damaged coral reefs. Indeed, on its website, NRDC has described itself as “thought leader and trusted advisor to our partners in China.”

With commercial and political partners already in place, Beijing may be hoping to capitalize on a regime change in Washington. COVID-19 has weakened China’s rivals, but it has also tarnished Beijing’s reputation as a trustworthy international partner.

One manifestation of that loss of prestige is the growing number of countries that, under prodding from the Trump administration, are shunning technology giant Huawei’s 5G gear, out of fear that it can be used by Beijing for espionage purposes. This is a trend Beijing must reverse.

Concerns over man-made climate change are most prevalent among global elites, and this is the audience Beijing’s environmental campaign is targeting, beginning with the United States.

Bonner R. Cohen, Ph.D., is a senior fellow at the National Center for Public Policy Research. This was first published at The Epoch Times.