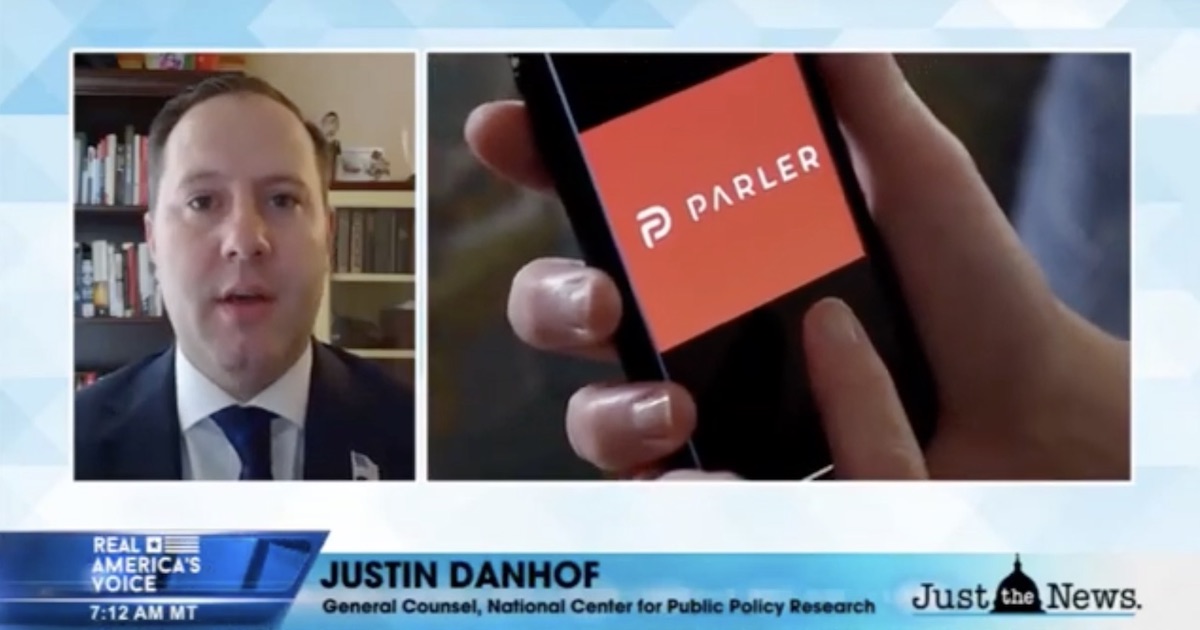 In advance of the second round of impeachment proceedings against President Donald Trump, National Center General Counsel Justin Danhof, Esq., warned that congressional action against the president based on claims of inciting violence and challenging election results, in an action that might stretch beyond his term of office, could set a “crazy precedent.”

“We all condemn the violence at the Capitol,” Justin pointed out. “But if we’re talking about inciting violence, President Obama’s rhetoric against the police led to five law enforcement officers gunned down in Dallas. Should we go back and try to [impeach] Obama for that? I don’t think so.”

In an interview with Carrie Sheffield on the Real America’s Voice network program “Just the News AM,” Justin – who is director of the National Center’s Free Enterprise Project – also spoke about the silencing of the president and conservatives on social media. He said this problem was obvious long ago, and that conservatives must shoulder much of the blame for ignoring it while suggesting that “the free market will solve this”:

They said, just create a new platform. If you don’t like censorship occurring on Facebook and Twitter against conservatives – which has been happening for a decade – create a new platform. So Parler did! But then [Big Tech] disappeared Parler. They’re like an unperson from George Orwell’s 1984 at this point.

Justin compared what Big Tech is doing in the United States to how these companies are acting in China:

Let’s parallel this to how Apple operates in China.

So clearly, in China, Apple is operating as an extra-governmental arm of the Chinese Communist Party – acting at the behest of the communists to do what they want. Well, we have folks like Nancy Pelosi and AOC, Kamala Harris in the United States calling on Twitter and Facebook and others to ban President Trump.  And to take down Parler.

And what are they doing? They’re honoring those requests.

This creates a dangerous situation for transforming free speech protections and the open discussion of news and ideas in America. And the impact has been seen on Wall Street.

Twitter’s permanent ban of President Trump led to a dramatic loss of share value for the company. The company’s political decision has hurt it financially, putting investors at risk:

Lawsuits should abound from shareholders.

Because boards of directors and management – their job, under state law, is to act as a steward for shareholders. That is their legal obligation. They are not to act as an extra-governmental arm of one party of another.

Justin said that, like in China, these companies appear to be acting “to appease a political class.”

Coca-Cola Commended for Taking an Intermission From Election Advocacy

Press Release / April 16, 2021
Black Activists Challenge Soda Giant to “Launch a Campaign to Help Get IDs to Those Who Need Them” Washington, D.C. – With Coca-Cola executives finally …
READ MORE

ConservativeBlog.org / April 13, 2021
It’s a very simple question: “who watches the watchdogs?” Instances of the media appearing to take sides on things that are purely political – consider …
READ MORE
The National Center for Public Policy Research is a communications and research foundation supportive of a strong national defense and dedicated to providing free market solutions to today’s public policy problems. We believe that the principles of a free market, individual liberty and personal responsibility provide the greatest hope for meeting the challenges facing America in the 21st century.
Learn More About Us
Subscribe to Our Updates