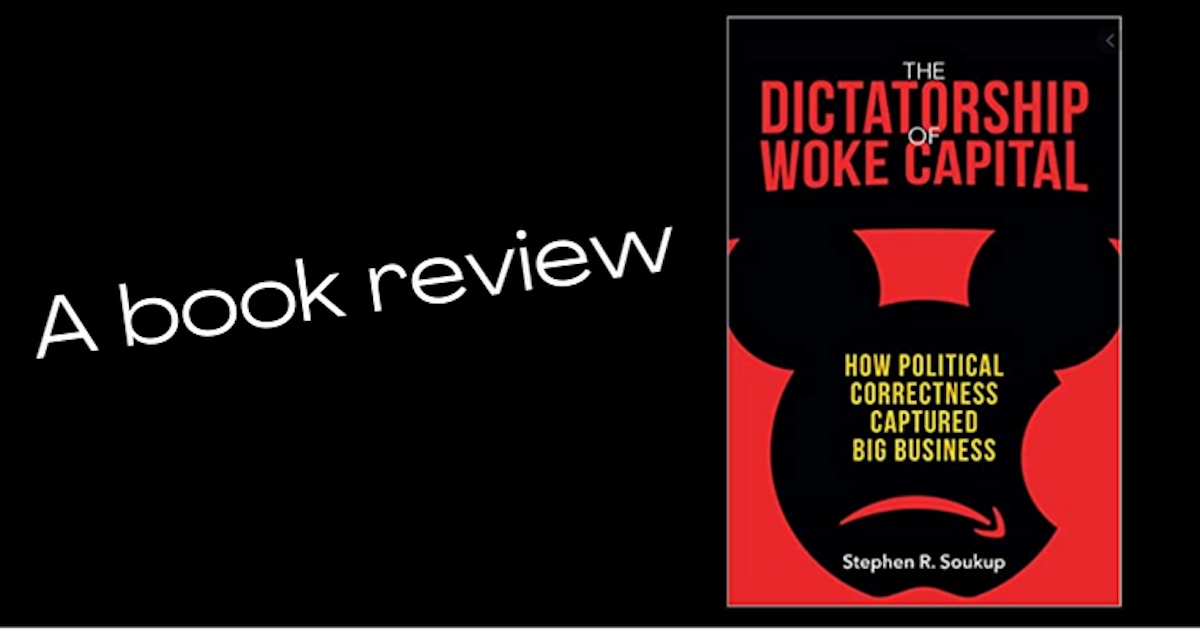 If you are concerned about corporate America’s march to the left, you will want to keep an eye out for the upcoming book, The Dictatorship of Woke Capital.

Author Stephen Soukup, Vice President and Publisher of The Political Forum, provides an in-depth overview of the rise of woke capitalism in the United States. He highlights the historical origins of the movement, the players involved – both on the hard-charging left and the conservative resistance (including our little band at FEP) – and specific examples of our nation’s largest enterprises applying this corporate governance model. Soukup dives into the approach the left has taken and will continue to take in hopes of turning the traditional makeup of the United States economy into a sociopolitical model. Soukup warns that conservatives must be willing and prepared to fight back against the woke mob in hopes of saving America’s traditional corporate culture – one that raised more people out of poverty than any economic system in world history.

Soukup details the events and figures that helped influence the rise of wokeism. This story begins in Italy and Germany – more specifically with the Frankfurt School, where critical theorists believed that solving the world’s problems required a Marxist lens. Their research and influence made its way to the United States about sixty years ago as they began to infiltrate American universities.

During the 1960s, Marxism, proto-wokeism, and the belief that American traditionalism was inhibiting and selfish became increasingly popular. This led to the rise of left-wing student activist groups and the Hippie Movement throughout the United States. Popular figures like Herbert Marcuse helped solidify this movement because he was ostensibly a scientist, a thinker, and someone who gave the youth intellectual legitimacy.

Soon woke culture seeped into all facets of American life, in what Soukup and others have called “the long march through the institutions.” Having already coopted nearly every other pillar of American culture (education, media, the arts, government, etc.), the left is now doggedly focused on its next victim: corporate America.

The second part of Soukup’s book takes a deeper look into current examples of wokeism playing out in our nation’s largest corporations. Apple and Disney are the poster children of using “ESG” (environmental, social, and governance) policies to satisfy the left-wing agenda of their politically-motivated leaders, Tim Cook and Bob Iger.

Soukup also considers the more social wing of wokeism that is attacking American businesses, highlighting organizations like the Southern Poverty Law Center, which is a money-making scheme that prides itself on identifying “hate” and “racism” while internally engaging in the same actions it claims to combat. Amazon and other large corporations are responsible for continuously funneling money into this illegitimate organization; The Dictatorship of Woke Capital provides the details.

While not all readers will agree with Soukup when he indicts the Enlightenment simpliciter for our modern travails, such minor disagreements detract nothing from the insight and power of the text. This book provides an illuminating roadmap to understanding the complex issue of corporate wokeism, and it will enhance readers’ understanding of the dangerous trend developing in the corporate sector.

Soukup’s book, The Dictatorship of Woke Capital, is available for preorder today. And to sign up for Soukup’s daily newsletter The Morning Call, click here.