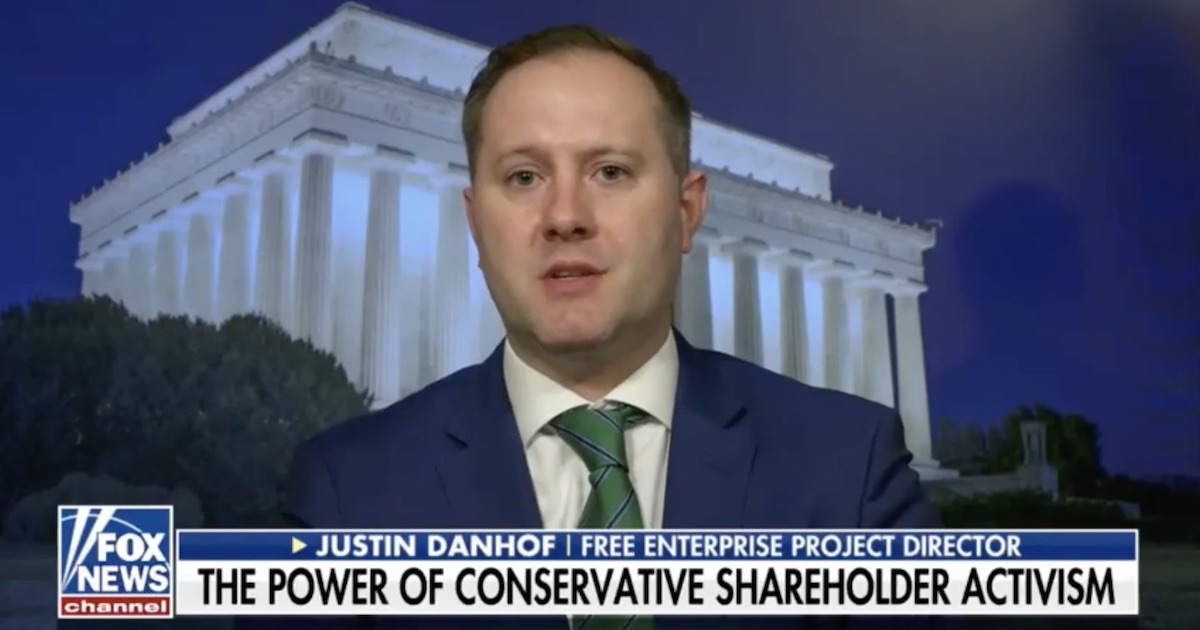 On the Fox News Channel program “The Next Revolution,” host Steve Hilton called the problem of woke businesses “an ideological campaign that’s been in development.” He pointed out: “It conquered the universities… and it’s been moving through our institutions. It’s the culmination of a very long ideological process.”

Calling this the “biggest internal threat America faces” and “the enemy within,” he turned to Justin Danhof, Esq.– director of the National Center’s Free Enterprise Project – to find out “what we can do about it.” He let viewers know that Justin has “got a very practical answer to that question.”

At any publicly traded company, there are two sets of very important votes that take place every single year at their annual shareholder meetings. The first is for the corporate directors, and the second is for shareholder proposals.

Taking a deeper dive into explaining these two important aspects of shareholder activism, by which any investor with even one share of a company’s stock can participate, Justin said:

Are you mad at Coca-Cola? Good! If you’re an investor, let’s vote the whole board out – not just the CEO. You’re mad at Delta? Let’s vote [CEO] Ed Bastian out!

Because the evidence bears out that what happens at corporate annual meetings is shameful. And it’s shameful if you’re a conservative investor. Because what we have is the equivalent of a red state election or a purple state election that goes blue every single year because the left coalesces organizations and their money together to vote.

And the evidence bears out that conservatives just don’t. We ignore this vote at our peril because… politics is downstream from culture. That’s what the left knows. That’s what the right ignores. And I’m glad we’re over the target today talking about it.

Laying out the importance of the shareholder proposal process and the need for conservatives to catch up, Justin added:

These things often seem nuanced or mundane, but they are tremendously important.

And guess what? I run the only organization on the right that – for the last decade – has been filing shareholder resolutions at these woke companies to try and course correct… [But] dozens of liberal groups that represent hundreds of billions of dollars engage and file hundreds of resolutions every single year.

In detail, he went through the importance for investors to pay attention to the proposal process:

[W]hat the left-wing activists are pushing today – that’s what becomes mainstream in three or four years.

So let’s look at it. Three or four years ago, Jesse Jackson and the SEIU were demanding affirmative action for boards of directors. Fast-forward to today – it’s Goldman Sachs who says they won’t finance your IPO unless your board is sufficiently woke. It’s NASDAQ, who literally has a plan to delist any of their own companies in their exchange that aren’t sufficiently woke or diverse in their eyes.

And so again, in three or four years, the agent of change went from Jesse Jackson and the SEIU to Goldman Sachs and NASDAQ. That’s why we have to stop these things in their infancy.

Emphasizing the importance of FEP’s message, Hilton said, “we’ve got to put the pressure on… we’ve got to organize.”