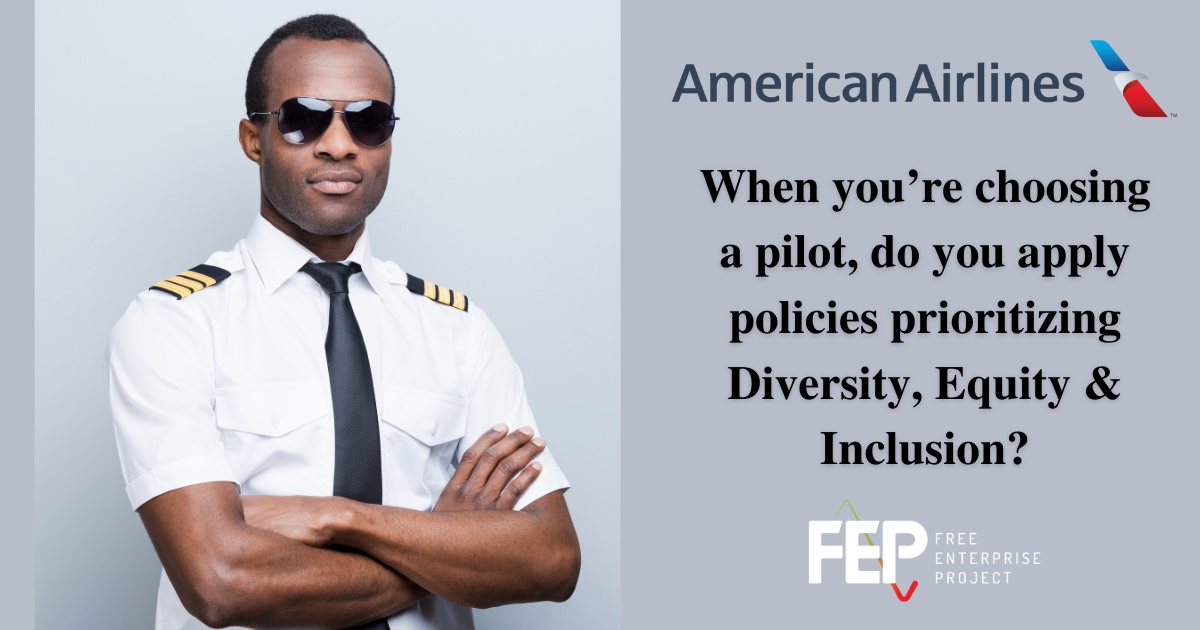 American Airlines makes no secret of its commitment to Diversity, Equity & Inclusion (DEI), especially as it pertains to hiring. Are these DEI policies also applied when hiring pilots?

Oh, absolutely, of course. Both at the mainline and the regionals. And if anybody wants to see proof positive, take a look at a video we put out, “[Honoring a] Legacy of Firsts.” It’s on our website and in the newsroom. And it’ll show you the great work that we’re doing from a DEI perspective, especially with bringing black aviators to the business and then seeing their careers really, really prosper, especially at American.

The exchange can be heard here.

“Illegal discrimination is evil in all situations, and equity-based discrimination is still just discrimination. In picking pilots, it’s straight up insane,” FEP Director Scott Shepard said after the meeting. “In its eagerness to stay woke despite ever-growing evidence that woke leads to failure, American Airlines is endangering lives and trashing its reputation.”

“Competence ought to take precedence over uninteresting immutable characteristics when evaluating candidates for any positions,” Peck agreed. “It’s bigoted to think otherwise. But when it comes to pilots, it’s not just nondiscrimination, morality and productivity on the line; it’s passengers’ lives.”

FEP discussed DEI at length (pages 7-14) in this year’s edition of the Balancing the Boardroom guide.

Today’s meeting marks the 55th time that FEP has attended or attempted to attend so far in 2022. To schedule an interview with a member of the Free Enterprise Project on this or other issues, contact Judy Kent at (703) 477-7476.

Investors wishing to oppose race-based discrimination and other “woke” policies infiltrating Corporate America should download FEP’s 2022 editions of the Investor Value Voter Guide and the Balancing the Boardroom guide. Other action items for investors and non-investors alike can be found on FEP’s website.