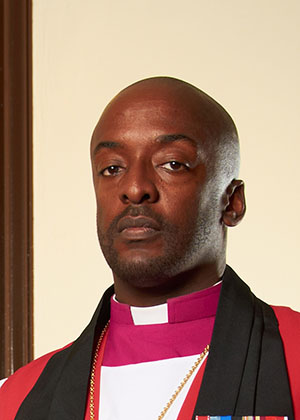 The Right Reverend Council Nedd II, Ph.D., TOSF is a founding member of the Project 21 black leadership network and a Pennsylvania State Constable.

Nedd serves as the rector of St. Alban’s Anglican Church in Pine Grove Mills, PA. He is the author of the books “Does America Hate God? Faith Under Fire” (with David W. Almasi, February 2015), “Teach Me How to Pray: A Guide to Family Prayer” (August 2014) and  “The Final Four: A Scriptural Journey Through Advent” (November, 2013). As an archbishop for the Episcopal Missionary Church, he has led Anglican churches in the United States, South Africa and United Arab Emirates.

Nedd was sworn in as a Pennsylvania State Constable at the beginning of 2016. “I decided to run for constable because I think it’s a noble office, and the single most cost-efficient form of government,” Nedd said at the time. “I am also very concerned about arbitrary and capricious enforcement of laws. The arbitrary enforcement of laws, collection of fines and fees seldom is in favor of the least enfranchised people in a particular community. At least in this part of Pennsylvania, those who can least afford to pay municipal fines are the ones who are most vigorously pursued.”

In 2021, Nedd was named “Constable/Marshall of the Year” by the National Constable and Marshalls Association (NCMA). In 2020, he was elected NCMA vice president. He also become the first non-Texan to graduate from the Texas Constables Leadership College of the Bill Blackwood Law Enforcement Management Institute of Texas in 2021.

Nedd started his professional life as a political campaign worker and congressional staffer. He also worked with D.C. charter schools for underserved children, where he taught history and established debate and rugby teams. While working in politics, he continued to pursue his true vocation and was eventually ordained a priest in the Anglican Church. In September 2005, he was consecrated as the Bishop of the Chesapeake.

His lifelong interest in politics, coupled with his desire to proclaim the Gospel, led him to launch In God We Trust, an organization established to push back against the secular tide in this country that is seeking to remove God from the fabric of American life.

Packing at the Pulpit: This Man of God May Arm Himself to Protect His Flock (November 2017)

A Firewall is Needed Against Militant Islam (August 2014)

The Return of Race-Based Voting (December 2009)

What the Church and State Battle Is Really About (December 2007)

When Silliness is Serious (November 2007)

The Poor Deserve More Than Reimports (May 2005)

How to Manage and Afford Senior Health Care (April 2005)

Trip to the Police Station Yields Concerns About Safety (September 2002)

On Fox News Channel’s “The First 100 Days,” Council says that by enacting the immigration executive order, President Trump has already done more to fight terrorism than his predecessor (2/3/17)

On “Behind the Curtain with Jack Burkman,” Council addresses the firing of WTAE-Pittsburgh TV news anchor Wendy Bell (4/5/16)

On NewsmaxTV’s “The Hard Line,” Council explains why the Black Lives Matter movement is likely unredeemable (10/30/15)

On One America News Network’s “The Rick Amato Show,” Council — a fellow “patient zero” — comments on whether Ebola patient Thomas Eric Duncan was treated poorly because he was black (10/15/14)

On One America News Network’s “The Rick Amato Show,” Council calls ISIS a “virus” deserving of a “drastic” remedy (9/17/14)

On One America News Network’s “The Rick Amato Show,” Council calls for prayer in the aftermath of the Michael Brown shooting (8/20/14)

On the Fox News Channel’s “Hannity,” Council advocates ignoring liberal hatred toward black consevatives and instead concentrating on working for change (4/8/13)