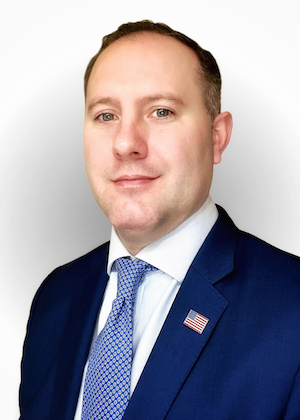 Mr. Danhof started with the National Center as a research associate from 2008 to 2009. Prior to joining the National Center, he worked in the Miami-Dade State’s Attorney’s Office in the Economic Crimes and Cybercrimes Division, for the Massachusetts Alliance for Economic Development and at the U.S. Securities and Exchange Commission.

Mr. Danhof’s work has been widely published and quoted in major newspapers, including the Wall Street Journal, the New York Times, Politico, USA Today, the Los Angeles Times, the San Francisco Chronicle, the Boston Globe, the Christian Science Monitor, and the Washington Post.  He has also appeared on the Fox News Channel, One America News Network, and the Fox Business Channel, among others.

In 2019, Mr. Danhof was presented with an Impact Award for his work leading the Free Enterprise Project. The Impact Awards recognize unsung warriors in numerous fields outside of government service who are making notable contributions to preserving America’s liberties with their life work.

Mr. Danhof is a member of the Federalist Society and Christian Legal Society.

Mr. Danhof is a graduate of Bentley University (Waltham, MA), where he received a Bachelor of Science in economics and finance and pitched for three seasons on the school’s NCAA Division II baseball team. Mr. Danhof completed his graduate studies at the University of Miami School of Law where he received his Juris Doctor and Master of Laws in Taxation.

Mr. Danhof is licensed to practice law in New York and Washington, D.C.