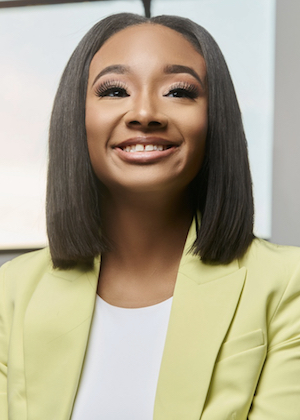 Whitley is the founder and owner of The Niche Agency, a public relations and advertising firm that specializes in multicultural marketing and storytelling. Over the past decade, she has helped shape the identity of major brands in the fashion and entertainment industries. Whitley worked with Motions Hair Care, launched a national campaign in Macy’s, and executed a cover of Essence Magazine in 2019 featuring Sean “P.Diddy” Combs. She has built a career in creating culture-shifting moments. In February of 2022, her photoshoot honoring the legacy of Madam CJ Walker went viral – garnering millions of views and amplified by celebrities such as Viola Davis, India Arie and Megan Good.

Her political experience began while in college, where she served as president of her residence hall for four years and successfully managed a campaign to elect the third black student body president in the history of Indiana University Bloomington.

Whitley managed her first major campaign in Los Angeles, where she served as a consultant to mayoral candidate Marc Little. In Indiana, she has been a community organizer, focusing on communicating conservative principles to the black community. She hosted the locally-focused “Yeah, I Said It” podcast, which has garnered thousands of views, uncovered political corruption and won a “Best News Podcast” award from PopCon.

She is currently the director of diversity and engagement for the Indiana Republican Party. In that role, she launched the “Indiana Republican Diversity Leadership Series,” a seminar and leadership training program that aims to attract, train and support conservative minorities throughout Indiana. She has placed an emphasis on creating coalitions and building authentic relationships, resulting in the program becoming both nationally recognized and successful within the state.

Whitley is an alumnus of the Indiana Leadership Forum, and is active in her community as a board member of the Indianapolis Black Chamber of Commerce. She is active with the American Marketing Association and a member of the Public Relations Society of America. Whitley has also worked in real estate, where she oversaw multi-million-dollar construction endeavors. She holds a Bachelor of Arts in liberal studies and a minor in legal studies from Indiana University Bloomington, and is now a J.D. candidate at the Indiana University McKinney School of Law.