20 Apr 2011 Defamed for His Tea Party Activism, Project 21’s Stacy Swimp Refuses to Give Up 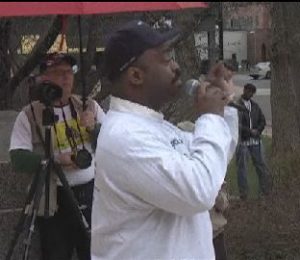 On April 15, Project 21 member Stacy Swimp was a featured speaker at a rally organized by the Southwest Michigan Tea Party Patriots in Kalamazoo, Michigan.

During his remarks, Stacy talked about the issues of black and white and liberal and conservative and the troubles facing people of faith.  He talked about there not being a need for a black or white agenda in the 21st century and how racial politics is hurting America.

Stacy’s speech can be seen by clicking here.

Commenting on how some people have told him not to participate in a conservative rally that seeks smaller and more responsive government, Stacy noted in Kalamazoo:

Within two days of the Kalamazoo event, Stacy was singled out in a YouTube video that portrayed his speech as “A Portrait of Self-Hatred.”  Created by a user named wyldflow3r, the video takes parts of Stacy’s speech and mixes it with a rap song and tasteless photos that include images of Uncle Ben, the cook from the Cream of Wheat box, Uncle Ruckus from “The Boondocks” cartoon and video of civil rights era events and Hitler at a Nazi rally.

While no one wants to be the focus of a hateful attack, Stacy is taking it well.  On his Facebook page, Stacy commented:

I am glad she did this video.  America is a great nation where freedom of speech is protected.  However, all she did, from where I sit, is prove the points that I always make about a victim mentality and the consequences of liberalism.

In responding to wyldflow3r’s complaint that Stacey was speaking to a mostly-white rally, Stacy added:

Why would I tell a predominantly white audience my thoughts about the black community?  Many of my white brothers and sisters in the audiences I speak to have never had an opportunity to hear a black conservative speak.  Many have never heard anything other than liberal rhetoric from a black political speaker.

I’ve lost count how many times I’ve been told by people in a tea party audience that what I say is “refreshing.”  The monolithic black political establishment and the media that follows them create the false perception that all blacks think alike.  That’s factually wrong, and isn’t perpetuating otherwise wrong at its core?  Besides, the liberals like to preach that it a good thing when people of different cultures are exposed to the diversity.

The hateful video composed in response to my exercising my right of free speech and the threatening comments from those in support of it validates what many conservatives have been saying for years.  Black Americans who would dare to rise above the idea of a separate America, who refuse to play the victim card and who have transcended from “we shall overcome” to “we have overcome” are often frightened of being open about such views.  This hate and anger that enforces allegiance to a liberal ideology in the black community is far more menacing than any form of overt or covert white racism in the 21st century.

Being called names is not uncommon for black conservatives.  Project 21, in fact, has gotten an apology of sorts from NAACP vice president Hilary O. Shelton, but Shelton has yet to make good on his promise to have his group actually speak out against the demonization of black conservatives.

Until then, Project 21 members take the abuse in stride.

In his opening remarks at the tea party rally, Stacy told the story of a woman calling him an “Uncle Tom” prior to coming to the Kalamazoo speech.  Besides remarking, “I didn’t know you were my niece,” Stacy considered the insult as a good sign, saying:

I get pumped up when I her that kind of thing.  You know why?  It tells me I’m doing what I’m supposed to be doing.