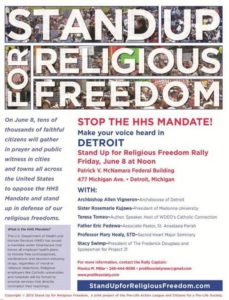 On Friday, June 8, the Coalition to Stop the HHS Mandate is coordinating rallies across the nation under the banner of “Stand Up for Religious Freedom.”

There are currently 160 planned rallies.  They are called to protest the ObamaCare mandate recently issued by the U.S. Department of Health and Human Services that compels faith-based organizations and related enterprises such as hospitals and schools to offer health plans that include birth control and abortion-inducing drugs that may violate their beliefs.

Rallies are planned at noontime in diverse venues such as the Ronald Reagan Sports Park in Temecula, California to the Wilkie D. Ferguson, Jr. Federal Courthouse in Miami, Florida to Upper Senate Park in Washington, D.C.

At the Detroit rally outside the Patrick V. McNamara Federal Building, Project 21 member Stacy Swimp is on the agenda to speak.

To follow are portions of Stacy’s prepared remarks for tomorrow:

Thomas Jefferson referred to limited government as “the chains of the Constitution,” which is supposed to prevent lawmakers from growing government too big.  Jefferson’s concerns have come full bloom today in the form of this mandate from the Department of Health and Human Services.

The Department of Health and Human Services mandate absolutely violates the religious freedom of every Christian church and institution in our republic.

Political ideology is irrelevant.  This is about our relationship to God, and government attempting to violate and regulate that relationship.  Hence, liberals and conservatives can and must unite against this intrusion.

The mandate requires that every group health plan in the nation must fund contraception, sterilization and drugs that can induce abortion.

The mandate ties the hands of churches behind their backs and makes it practically impossible for any to qualify for exemptions.

Every church, and Christian-oriented institutions in the Republic would be forced to cover drugs and services that violate their very doctrine, with no chance of opting out of the mandate.

This is why we must stand together and fight it — with all that is within us.
In the words of Frederick Douglass: Resist, Resist, Resist!