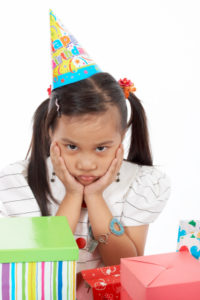 a girl wearing a party hat over a white background

Apparently not in the minds of the leaders of the city’s public school system.  These bureaucrats are in the midst of pushing a list of banned words they seem to think will meet the sensibilities of younger residents of the Big Apple.

Administrators are circulating a list of words and topics they feel are upsetting to students and should therefore not appear on standardized tests.

They want some words killed so that evolving intellects aren’t scarred from birthday to birthday.  That sentence, by the way, contains three of the banned words (four if you could “birthday” twice).

Computers (in the home — school computers are OK)

Disasters (including tsunamis and hurricanes)

Slavery (this is going to make history classes interesting)

Terrorism (our embassies are closed right now because…)

member Darryn “Dutch” Martin is appalled that schools may purposely ban talk of issues such as politics, wealth and poverty, religious observances and even personal swimming pools as a nod to political correctness and protecting allegedly fragile feelings — especially when there are so many other problems in government-run schools that need to be fixed.

This is just another example of Big Brother gone wild!

Who gave the New York City Department of Education the right to determine which words are offensive?  And compared to what?

Shouldn’t school officials be focusing more on shrinking the academic gap between black and Hispanic students and their white and Asian counterparts in reading, writing, mathematics and overall graduation rates?  How about dealing with truancy, encouraging parents to take a more active role in their school children’s education?

Apparently, banning certain words and phrases that might hurt certain students’ feelings is of a higher priority.