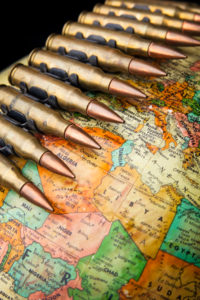 Globe with North Africa and the Mediterranean Sea in focus and a bandolier of machine gun ammo draped across it.

So far, #bringbackourgirls has not secured the release of the hundreds of Nigerian schoolgirls kidnapped by the Boko Haram terrorist group.  No matter who flashes the hashtag – be it First Lady Michelle Obama, British Prime Minister David Cameron or nearly-naked fashion models – these African Islamists seem unwilling to listen to the sound reasoning of a blank sheet of paper and a marker.

It also begs the question: do Islamist militants even tweet?

Upping the ante of late, Nigerian President Goodluck Jonathan has offered to negotiate and even swap imprisoned militants for the girls.  America has sent “advisors,” planes and drones to assist in finding the girls.

With the lack of progress thus far, Nigerian troops have engaged and killed Boko Haram members.  Even Nigerian civilians are fighting back.

In other words: it’s on.

Why is Boko Haram kidnapping and killing Nigeria’s children in the first place?  It’s a hatred of the west, principally.  “Boko Haram” translates into “western education is a sin.”  They are kidnapping boys.  They are kidnapping girls.  In a nutshell, they believe in Sharia law that essentially says women should be at home tending to the needs of their husbands and not learning math.

It’s a series of hate crimes.

So why is the shocking kidnapping of all these innocent girls the thing that has finally made the world spring to attention about these radicals?  More importantly, why did the U.S. State Department pointedly choose not to designate Boko Haram as a terrorist organization until just recently – despite the attacks on boys, girls, Christians and Muslims?

Under Secretary of State Hillary Clinton’s leadership, the State Department resisted labeling Boko Haram a terrorist group.  It eventually was – in 2013, during John Kerry’s tenure.

During their era of innocence in American eyes, Boko Haram even openly threatened to kill the U.S. ambassador to Nigeria.  And that was before Benghazi! 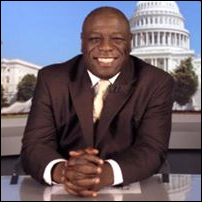 This is a bit much for Kevin Martin, a member of the National Center’s Project 21 black leadership network.  A Navy veteran who traveled in the Muslim world while serving our nation, Kevin is aghast at the way the Obama Administration – and the Clinton State Department, in particular – allowed the Boko Haram threat to go unaddressed and to fester.

Boko Haram is a very dangerous Islamic terrorist group that has been destabilizing northern Nigeria for years.  Their terrorist actions over the last four years include mass murder, kidnapping and forced conversions to Islam.  There are thousands of victims of their actions and many more grieving family members and friends.

While some Americans are only now discovering the extend of Boko Haram’s past crimes through social media’s #bringbackourgirls – and, even then, it is mostly restricted to efforts highlighting the group’s kidnapping of more than 200 Nigerian school girls – the truth of the matter is that the Obama Administration had the chance to label Boko Haram a terrorist group as far back as 2011 and refused to do so.

It’s apparent that this neglect was because of the politically correct fear of labeling a group of African Islamists as terrorists.

But the facts are clear.  Since 2011, Boko Haram has grown stronger.  This is especially the case following the Libyan civil war, when the group was allegedly able to obtain several types of heavy weapons – including MANPAD anti-aircraft weaponry.  Possession of such armament essentially puts Boko Haram on par with Nigerian military.

While some conservatives – including me – question the effectiveness of the social media activism of Michelle Obama and others, the real question that remains is this: why, when the Obama Administration and the State Department had the chance, did it refuse to label Boko Haram as a terrorist group.

The Obama Administration inaction of a few years back – under the leadership of Hillary Clinton – likely only emboldened Boko Haram – which lead up to this particular kidnapping that has given them the worldwide attention they have obviously been seeking.