That fact and other unsettling details about the racial underpinnings of progressive labor laws are laid bare by Project 21 co-chairman Horace Cooper in a new paper published by the Capital Research Center.

Featured in the June issue of the Capital Research Center’s “Labor Watch,” Horace chronicles a myriad of landmark labor laws to show how many of them were tainted by the Jim Crow law mentality of the era in which they were created.  But, rather than throwing them on the ash heap of history like other racial laws of that era, these progressive labor laws are still championed by the left and their troubling histories are largely ignored by those regularly hypersensitive about issues of race.

In the paper, “The Untold, Racist Origins of ‘Progressive’ Labor Laws,” Horace writes:

Many federal labor laws in the United States originated in efforts to saddle black men with extra burdens and limitations, in order to (as racists often put it) “protect white jobs.”  Tragically, these laws, in one form or another, remain on the books today and continue to hamper the ability of blacks, especially men, to enjoy gainful employment.  Yet so-called Progressives hail these laws for their supposedly humanitarian effects, and praise the sponsors of these laws for their supposedly good intentions. 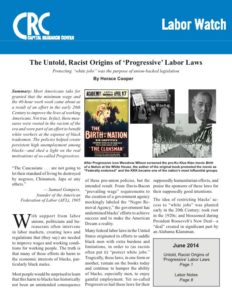 In the 1920s and ‘30s, black tradesmen were generally barred from joining most labor unions, which meant that any mandated “union wage” was effectively a “white man’s wage” and, at the time, would not be paid to an itinerant, non-unionized black construction crew.

Even the National Labor Relations Act of 1935, the “quintessential labor-law achievement of the Progressive movement” that allowed union organizing, collective bargaining and labor strikes had “racially significant exceptions” in the fact that the law did not apply to agricultural and domestic workers — groups that had extremely large black participation rates.

And the minimum wage guarantee set up by the Fair Labor Standards Act of 1938 also contained an exemption for agricultural jobs.

Horace points out how these unfair laws continue to affect black America:

The laws all but eviscerated opportunities for blacks, particularly unskilled black men, and the racial consequence — to use a liberal term, the disparate impact of these laws — continues today…

Before these laws were enacted, blacks were making rapid progress.  Hiring blacks made good economic sense and practically every black man that wanted a job could have one.  Black employment empowered the community and led to dramatic gains in terms of lifestyle.  Black employment was so robust that non-black communities organized and successfully created roadblocks to give one group — white men — a competitive advantage.  The effects of these policies persist today.

To read the full test of Horace Cooper’s paper on unfair and racial labor laws created by the Progressive Movement, click here.