Attorneys Horace Cooper (Co-Chairman of Project 21), Kisha Hebbon and Tamara Holder discussed the grand jury process that led to no charges being filed against officer Darren Wilson in Ferguson, Missouri on The Sean Hannity Show.

Horace Cooper: Mainstream media reports were contradicted by forensic evidence, yet were a cause of the protests.

“Here’s the problem. When the mainstream media reported, unchallenged, false narratives from people who said they were eyewitnesses — and it turned out they actually weren’t eyewitnesses — from people who described what they said they saw, then the forensic evidence showed it was almost impossible for that to occur. You get his fingerprints, and you get his blood on a firearm only by close contact. It just isn’t plausible to now want to say a man grabs for a police officer’s gun, threatens him, gets out of the car, jumps down on his knees, puts his hands in the air, and then the police officer shoots him point-blank. At least one of the witnesses I saw on MSNBC said Michael Brown was laying on the ground and a kill shot was administered by Darren Wilson. The forensic evidence showed none of that. For the mainstream media to report these things as facts… obscured the truth about the forensic evidence…”

“I’m an African-American female who grew up in the inter city, and I’m tired of people saying, ‘why is this happening, why is this happening.’ When do we as African-Americans look at ourselves and say ‘why is there a heightened level of fear when it comes to African-American males?’ What are these males doing wrong? What about the innocent people who are killed by gang violence? Blavk-on-black crime. We need to look at that. Michael Brown’s life is not any more important than any other innocent child who was shot down the other day in Newark on Chancellor Avenue. We need to look at those issues.” 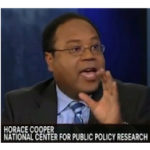 Horace Cooper: Eric Holder “chose to act more like Bull Connor in inflaming racial tensions than someone like Martin Luther King, who tried to diminish those, and bring this country together.”

“Eric Holder had access to the forensic information. He had to know that there were eyewitnesses, black ones, who were prepared to report exactly as Darren Wilson had indicated when he first gave his report to his officers. They were giving similar, almost identical accounts. He had to know that, and yet he chose to act more like Bull Connor in inflaming racial tensions than someone like Martin Luther King, who tried to diminish those, and bring this country together.”

Kisha Hebbon: “There are a lot of good police officers who are out there to protect and serve, and I feel bad for all of them…”

A lot of people on social media are saying things like, ‘oh, you can’t trust any of the police; they’re all bad; I’m teaching my children not to like police officers,’ and I think that’s the most ignorant, senseless thing to do. There are a lot of good police officers who are out there to protect and serve, and I feel bad for all of them, with this crisis going on right now.”

Horace Cooper: Darren Wilson is to be commended for being willing to testify before the grand jury, even though he was required to do so without his attorney present.

“A quick fact. Every single accused person has a constitutional and legal right in all fifty states to voluntarily go and testify before the grand jury. The statements can be used against them, but it is not unprecedented, it is not true that it doesn’t happen. And so, Mr. Wilson chose to exercise that option; he appeared without his attorney. I commend him for having chosen to do that.”