On the first Friday of every month, Project 21 member Derryck Green provides his analysis of the nation’s economic stability under Barack Obama’s stewardship that is done in conjunction with the release of federal unemployment figures.

This time, Derryck wonders what will happen with unemployment and other facets of the economy as Obama brings illegal aliens out of the shadows and possibly onto the entitlement track.

Here is December’s “About Those Jobs Numbers”:

Newly-released unemployment figures from the federal government are almost the same as a month ago.  There’s probably some celebration that the official jobless rate remains below six percent.  But there are the lingering problems of the alternative and more overall measure of joblessness — the calculation that includes those seeking employment, are underemployed and who have stopped looking for a job in frustration — that is around twice the size of the rate that the mainstream media regularly reports.

But get ready for the possible blindside.

For November, that official unemployment rate as reported by the federal Bureau of Labor Statistics is 5.8 percent — no change since last month.  That alternative rate, however, is a much higher 11.4 percent.

Want more bad news?  Racial minorities, particularly those considered to be among President Barack Obama’s political base, continue to suffer.

The overall unemployment rate for blacks is 11.1 percent.  That’s up.  This is bad enough, but it’s even worse for black teens.

As the media focused on the unfortunate death of one black teenager in Missouri, they seem to fail to notice that a lack of jobs is killing the hopes and dreams of so many others in Michael Brown’s age and race demographic.  This past November, 28.1 percent of black teenagers were out of work — being deprived of income, training and hope.  This was a  small decrease since the previous month.

In the Hispanic community, the official unemployment rate fell to 6.6 percent — still above the national average.  But it begs to be asked where this rate might be going in the coming months.  It’s a question that should be on everyone’s mind as Obama presses forward on his obvious quest for amnesty for our nation’s illegal alien population.

It’s a problem that will have a profound impact on the workforce, taxpayers and America’s safety net for its least fortunate. 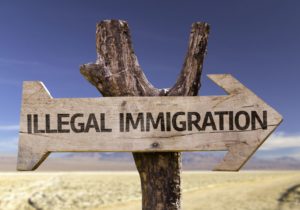 After the mid-term elections, the President finally acted on his long-threatened intention to legalize millions of people who smuggled themselves into the United States against the law.  Around five million of these illegal immigrants are slated for exemption from deportation unless Congress figures out a way to successfully halt Obama’s executive action.

As Obama seeks to bring these illegals “out of the shadows,” at what point will jobless statistics begin to reflect this new influx into the official American employment equation?  Obama and his advisors had to know that the unemployment rate would necessarily skyrocket upon the opening of his road to amnesty.

And a rise in unemployment generally as well as decreased job prospects for American citizens and legal immigrants in particular, in an already tough job market, is likely only going to be the beginning.  Consider the possible cascade of new economic problems that undoubtedly lie ahead because Obama chose to go it alone on the illegal immigration issue and “go big” in the process:

Let’s not forget that there are those on the left who now say that what the President did for illegal immigrants was not enough.  Erika Almiron of the group Juntos, for instance, told the Washington Times, “When we declare ‘Not One More Deportation,’ we mean just that.”  Still others, striking a seemingly more moderate pose, say that effectively giving amnesty to around five million people who cheated the system and didn’t wait in line and pay the fees and undergo the examinations involved in the legal immigration process is just a “down payment.”  That’s strange, since Representative Luis Gutierrez (D-IL) referred to Obama’s 2012 executive action as a down payment back then.

Just how much of a debt are we supposed to owe these lawbreakers anyway?

Too many legal Americans are treading water as it is right now.  According to the official federal estimate, there are 9.1 million Americans looking for work.  That’s more than last month.  That job pool is about to get a lot more crowded thanks to the independent action of Barack Obama.

America’s jobs crisis seems about to get a whole lot worse.  Legal citizens desperately seeking work are about to find foreigners zealously and openly competing with them for the scant openings that are available.  Those who cannot compete, or simply join the ranks of the demoralized and give up, will further strain the government’s safety net of benefits.  And they will be joined by possibly millions more people who have come out of the shadows with a hand outstretched.

It’s a bad situation that’s likely only on the verge of getting worse.