Project 21’s Joe Hicks appeared for the third time in three weeks on the Fox News Channel’s “The Kelly File” on December 8, 2014. He noted that Eric Garner’s family does not see Garner’s death as a racial issue, but President Obama and New York Mayor Bill de Blasio outspokenly do.

Said Joe: “It’s very significant, I think, that you hear this dour, down, sour note kind of thing from the mayor of New York as well as the president of the country, yet you have a couple of relatively unsophisticated working people who just out of the gate tend to see it in a much more different way. I think that says something very significant about the leadership ranks of this country, the elites of this country, and what people down at the grassroots level of the country, in a daily kind of way, tend to see things — very, very different.”

Joe is the vice president of Community Advocates, Inc., a privately-funded Los Angeles-based political think-tank. He appeared on the show with host Megyn Kelly and Bret Stephens of the Wall Street Journal.

For more about Project 21 and related activities, subscribe to our free action newsletters here.

For more than 35 years, Joe has been an active and high-profile figure. Beginning in the turbulent 1960s and into the 1990s, Joe’s views were aligned with what he describes as the “orthodoxy of left – liberalism.” By the mid-1990s, however, he began a lengthy re-examination process that resulted in dramatically-altered political views and positions. Today, Joe’s views often stand at odds with the beliefs with which he was long associated, and he now identifies himself as a political conservative.

Joe’s other recent appearances on Fox’s “The Kelly File” on events in Ferguson, Missouri can be viewed here and here.

In August, the Orlando Sentinel published an op-ed by Joe on how President Obama’s amnesty plan for illegal aliens would hurt blacks, available here (free registration required). That article said, in part:

…we now have America’s first black president defiantly threatening to use his executive power to grant amnesty to perhaps as many as 11 million unauthorized immigrants. In doing so, Barack Obama would thumb his nose at a Congress that refuses to, in his words, “… pass a darn bill.”

So far, however, what the U.S. House refuses to pass is a bill legalizing more competition for low-skilled black domestic workers. 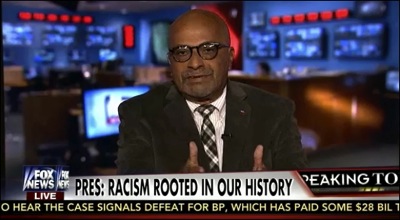 Obama is effectively ignoring the plight of black workers who have lost economic ground and struggled mightily during a recession from which America has yet to fully emerge. The unemployment rate for blacks in 2013 without a high-school diploma was 20.5 percent; for those with a diploma, it was still disproportionately high at 12.6 percent. The rate for all races was 7.4 percent, and 6.5 percent for white workers.

Highlighting the dilemma is that unauthorized workers and black entry-level citizens have a similar median age — approximately 36 and 39 years old, respectively. Once settling largely in border areas, unauthorized immigrants are now migrating to major urban areas and rural areas in southeastern states that also tend to have higher black populations. This puts unauthorized immigrant workers in direct competition for jobs with black citizens…

In conclusion, Joe wrote, “As civil-rights leaders now converge on Ferguson, Mo., to claim racism in the police shooting of Michael Brown, they are strangely silent on the economic threat illegal immigration poses to millions of low-skilled black workers. Might it be that these leaders have simply become loyal foot soldiers to partisan politics and a president who looks like them?”