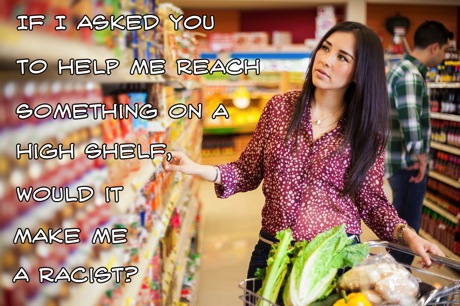 In a new interview with People magazine, Barack and Michelle Obama claim that, in the words of interviewer Sandra Sobieraj Westfall, “their encounters with racial prejudice aren’t as far in the past as one might expect.”

As examples, Barack Obama claimed that “[t]here’s no black male my age, who’s a professional, who hasn’t come out of a restaurant and is waiting for their car and somebody didn’t hand them their car keys” because they thought dressed-up black men such as Obama were valets.  Michelle Obama added a story that “somebody asked him to get coffee” when he wore a tuxedo at a formal dinner.

Michelle Obama herself discussed being asked to reach something from a high shelf for someone while she was shopping at a suburban Washington, D.C. Target store, saying: “The only person who came up to me in the store was a woman who asked me to help her take something off a shelf.  Because she didn’t see me as the first lady, she saw me as someone who could help her.  Those kinds of things happen in life.  So it isn’t anything new.”

Members of the National Center’s Project 21 black leadership network don’t think the interview did anything to help with America’s currently strained racial relations.  In fact, it might have actually hurt them.

By telling the average black American that the President of the United States and his wife cannot get a break — even while they’ve been in the White House — it is undoubtedly demoralizing.

President Obama’s remarks are remarkably destructive.  He stokes racial resentment and creates the false impression that racism and bigotry play a real role in whether blacks can currently achieve their aspirations.

I have some questions for the President.  Do any of these experiences mean that it isn’t possible for black Americans to achieve in this country?  Do they mean that a black man can’t become the leader of the most powerful nation on the planet?

I don’t question the veracity of the President when he makes these claims, but I do question the validity of presenting them as legitimate examples of the barriers that hold black Americans back.  Racism and bigotry are not the drivers of high unemployment, broken families and elevated crime in the black community.

Obama’s comments undermine the will to achieve and, by doing so, he is rhetorically cutting off the bottom rung of the achievement ladder — the very one that he used to advance.  Using the highest office in the land to express personal resentments is divisive and will likely serve only to condemn legions of struggling blacks to poverty and no hope for experiencing the American Dream.

Also commenting on the People article and the potential fallout, Project 21 member Christopher Arps, appearing as a guest on the 12/17/14 edition of “The Rick Amato Show” on the One America News Network, added:

Right now, America is a racial tinderbox.  And, for the President and First Lady to make these types of comments, in my opinion, is just reckless.

Christopher thinks he might know why the Obamas said what they did.  Noting that Obama’s approval rating among all Americans is quite low, he pointed out that black Americans “are really carrying [Obama] right now” when it comes to political support.  But black support for the President is eroding, with some blacks referring to the controversy in Ferguson, Missouri as “Obama’s Katrina” — an allusion to the 2005 hurricane that hurt the reputation of former president George W. Bush.

Christopher thinks Obama is seeking to bolster his credentials with his black base at the peril of the nation as a whole.  He said:

I think that these comments he’s making are trying to authenticate himself [with other blacks].  I also think that this comes… when a lot of African-Americans are upset with him… Unfortunately, he’s further dividing the country instead of bringing it together…

To be intellectually honest, you have to bring up that he was elected a senator from Illinois, and he’d been elected president and re-elected president.  So you’ve got to qualify that with those things that happened also.

Additionally, Michelle Obama’s Target story, as told to People, conflicts with her description of it in a 2012 interview with late-night television talk show host David Letterman.  On Letterman, she said she was “undercover” while she told People it was “wonderfully publicized” (though press coverage was extensive, it was not until was after the trip).  She told Letterman, “I felt so good” helping the shorter woman get detergent from a high shelf, as opposed the People description of “she didn’t see me as the first lady, she saw me as someone who could help her.”

Christopher said her new telling of the story was likely all part of a calculated strategy by the Obamas:

Everything is political.  And whatever they can use at the moment to try to gain some political points or curry some type of favor with a Democrat constituent group, they will do that.  And this is just an instance when she’s been caught.