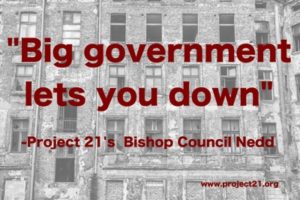 If the current price of gasoline — due largely to new extraction on privately-owned land — is any indication, American innovation is a clear success story. The private sector, so despised by big-government proponents, is proving its worth.

Bishop Council Nedd II and Kevin Martin, both members of the National Center’s Project 21 black leadership network, were interviewed separately by Thom Hartmann on his RT network program, “The Big Picture,” on 1/21/15 and 1/22/15, respectively.  Both debated Hartmann on infrastructure and energy policy.

Both Council and Kevin agreed the private sector is better able to fix infrastructure problems that are arguably created by big government in the first place, while Hartmann blamed Congress for withholding funding for construction projects.

In his opening statement, Council remarked:

You can’t just have these bridges falling down.  It’s a shame when big government lets you down like that… [But] if they can’t keep the roads safe, someone [else] needs to do it.

During the show, another conservative commentator mentioned that technology of “composite-based” products could support bridges and roads for decades, but proposals to use it commercially are blocked by labor unions.  Shifting the blame, Hartmann claimed conservatives in the congressional leadership prevented legislation on infrastructure.  But Council noted this claim ignored the fact those bills Hartmann cited included incredible amounts of pork-barrel spending not necessary to keep bridges from falling down or get rail lines built, and it was this that garnered conservative opposition.

In his segment, Kevin dug a little deeper as he sparred with Hartmann, touching on the Keystone XL pipeline issue.

First of all, infrastructure is a product of America’s taxes [and] it’s not a freebie because government doesn’t do anything for free… But [the President] wants to select what infrastructure we spend our money on.

President Obama has made it quite clear he will not sign the bill already passed in the U.S. House of Representatives allowing for completion of the Keystone XL pipeline.  Instead, he seems to favor the status quo and the desires of the environmentalist lobby.

However, Kevin pointed out what President Obama failed to mention or apparently realize is that most of the machines used by construction crews run on diesel fuel and use asphalt during the construction of roads and bridges.  Whether he likes it or not, infrastructure improvement projects are inherently dependent on crude oil, since they wouldn’t be able to work without it.

As Council remarked: “It’s a shame when big government lets you down like that.”