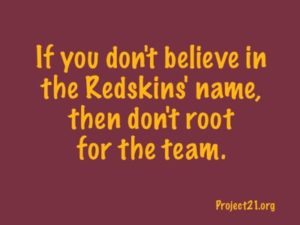 While most other football fans are fixated on deflated game balls right now, there’s a small but allegedly influential special interest group hard at work trying to lend its credibility to an ongoing pressure campaign to get the Washington Redskins to change its name.

But has the Fritz Pollard Alliance put its credibility at risk by seeking to essentially muzzle the free speech of the team’s owner and those who support his choice to retain the Redskins name?

The Alliance, a nonprofit operated by former players and including minority coaching and front-office staffers working throughout the National Football League as its representatives, decided to join those who claim the name of the Washington Redskins “hurts the League and it hurts us all.”

Redskins owner Daniel Snyder says he will not change the team name, and team spokesman Tony Wyllie told the Washington Post that the Fritz Pollard Alliance “ignored the outstanding support we have received from the Native Americans across this country for the Washington Redskins…”

While the Alliance helped the NFL in the past deal with concerns about minority hiring and the use of hate speech on the field during games to much success, members of the National Center’s Project 21 black leadership network are skeptical of the group for inserting itself in the name-change campaign.

Not only does it seem off the group’s mission of “promot[ing] diversity and equality of job opportunity,” but threatens free speech as well.

I have been a Redskins fan my entire life.  My first grade teacher at Woodside Elementary School in suburban Maryland made the entire class learn to sing “Hail to the Redskins” right along with other classic American songs.

People may not like the team’s name, but this is a simple free speech issue.  The Redskins are privately owned.  If the public doesn’t like the name, they don’t have to support the team.  I have some very dear friends who decided to stop supporting the Redskins because of this issue.  That’s fine by me.  If enough people join them, maybe the ownership will actually decide to comply with their wishes.  But trying to force change through heavy-handed tactics such as government intervention is draconian.

Daniel Snyder, the owner of the Washington Redskins, is clear that he has no plans to change the name of this historic and storied team.  There aren’t many things I will applaud Daniel Snyder for, but this is definitely one of them.  If people want to talk to Daniel Snyder about something important, ask him if he is going to support the coach on his quarterback decisions.  Ask him why he moved the training camp from Carlisle, Pennsylvania to Richmond, Virginia.  When he did that, central Pennsylvania became Baltimore Ravens territory.  How smart was that?

There aren’t more important things on which the Fritz Pollard Alliance can focus?  Was the issue of long-term effects of head trauma suddenly solved and I missed it?

I think it’s incredibly telling and hypocritical that John Wooten, a former Redskins player, is now blasting the team that once paid his salary.  Where was his interest in “respect and dignity” when he was cashing his paychecks?  Is he planning to return this apparent blood money to the team or donate it to charity?

Additionally, Project 21 Co-Chairman Horace Cooper, a legal commentator who taught constitutional law at George Mason University and was a former leadership staff member for the U.S. House of Representatives, said:

It’s such a shame when groups claiming to have the interests of black America at heart lose focus.  Here’s a reminder – black unemployment is through the roof, net wealth in the black community is below the floor and family formation is in shambles.  Black Americans care more about these kitchen table issues than what the owner of a private sports team chooses to call that team.  Yet the Alliance is part of an effort that includes lawmakers and government bureaucrats to bring the owner to heel.  What team is next?

Here’s a thought: How about focusing more on making it possible for black America to be able to buy tickets to an NFL game instead of putting the pressing political interests of blacks at the back of the bus by focusing on team names?