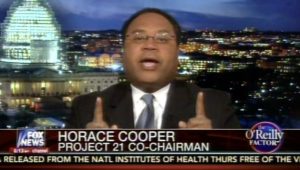 Debunking the left-wing narrative that police-related killings of black men proves a “systemic problem in America” Project 21 co-chairman Horace Cooper pointed out on the Fox News Channel’s “The O’Reilly Factor” that the facts show there is really “an elevated risk of death that will not come from law enforcement, but that will come from other black Americans.”

Debating liberal talk radio Alan Colmes on the 4/9/15 edition of the show, Horace noted the risk of police-related deaths in the black community needs to be seen in context:

The truth is… if you consider the elevated number of times that black Americans encounter law enforcement versus the actual number of deaths, it turns out that black people are not actually at risk.  They’re actually in a favored category.

Citing government statistics showing homicide as the second-highest risk of mortality for black men and greatly outpacing other demographics, Horace said this is “a sign that there is a disparate amount of criminality happening in this one group… [and] there will be a higher level of encounter with  law enforcement.”

Another disparity Horace revealed was a disinterest on the left when it comes to addressing the crime problem within the black community:

This is the progressive impulse.  Every single police killing is documented.  We understand all of the details of every police killing.  But what we don’t need is to have that argument made that there is a systemic problem when the evidence shows that there are other problems that progressives don’t care about.

They say black lives matter….  But when, in Chicago, there are more black deaths that happened in 2014 than in the last ten years… they say nothing about it.

In the black community, we need to have a conversation that’s unencumbered by the radical left and progressives’ agenda that tries to use government coercion to address some problems.