22 May 2015 Understanding Exactly Why “Freedom Is Not Free”

As we head into the Memorial Day weekend, Project 21 member Charles Butler has a message for those who might not understand the meaning behind a holiday that many trivialize or merely consider the beginning of summer fun:

People often use phrases and idioms that sound cool and hip without really understanding their true meaning.  We will definitely be hearing one phrase of that sort this weekend: “freedom is not free.”

When people who have never served in the military use the phase “freedom is not free,” I often find it to be done in a very convoluted and disingenuous manner on many levels.  For example, we lost dozens of American lives fighting to hold Ramadi almost a decade ago, and yet campaign promises essentially gave the Iraqi town to ISIS terrorists just this week.  These brave men and women who died in service to our nation will be mourned this weekend.  Fathers, mothers, sons, daughters, husbands and wives will be missed.

A price was paid in Ramadi for freedom, but then the investment was squandered.  That’s not right.

Americans of all ages, socio-economic status, politics, ethnicity and gender use “freedom is not free” as if they know exactly what it means to put service to their country and the commitment to an ideal before one’s own self interest.  They often do not.  The truth is that only a fraction of Americans under 50 have served their country in uniform.  Many really don’t seem to feel it is their obligation these days.

So we can establish people are often unclear on the concept of “freedom is not free.”  It’s a shame.  When people use it, do they at least even know its origins?  The honest answer is probably not.  But that’s OK.  To help, here is some background and credibility for them as we prepare to observe Memorial Day weekend.

The origin of “freedom is not free” is credited to retired U.S. Air Force Colonel Walter Hitchcock of the New Mexico Military Institute.  It is meant to express gratitude for the service of members of the military, implicitly stating that the freedoms enjoyed by those living in democracies today are only possible due to the risks taken and sacrifices made by those in the armed services.  It conveys respect — specifically to those who gave their lives in defense of our freedom.

“Freedom is not free,” for example, is engraved onto a portion of the Korean War Veterans Memorial, Washington, D.C.  While it should be a powerful phrase to all, it is particularly important to veterans.

Those of us who have served our country honorably salute and say an often-silent prayer for our fallen brothers and sisters who fought so Americans can enjoy the rights and freedoms granted to them by our Constitution.  When you are at a BBQ or watching the game this weekend, please take a moment to say at least a silent “thank you” to veterans for their service.  You might also donate to veterans’ charity to lend a helping hand to those vets who have fallen on hard times.

And you might also say a prayer for those still serving.  They seem to need it these days.

Memorial Day should not be political.  But the U.S. military has nonetheless been the object of mass social and political experiments under this and other presidential administrations.  The dishonor and immorality now being implemented in the military is an abomination.  I have spoken with many active and retired military personnel, and they all have a common complaint: the Obama Administration is disruptive and degrading to the military’s ability to do its job.  The political agenda imposed by this White House, they say, is endangering lives.

That’s why my prayer is that God protects our brave men and women, and that He gives them the support they need to do their job and return home safely and healthy to their families.   Amen. 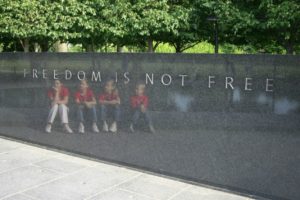