05 Jun 2015 Despite High Jobs Numbers for May, Obama Still Has the American Economy in a Ditch

In his ongoing analysis of the state of the American economy under President Obama’s stewardship, Project 21 member Derryck Green isn’t feeling so great these days about having been right in his previous month’s speculation that the economy was already on a downward slide.

Derryck’s dismay over that, and poor economic indicators all over the place, are now on display — including what’s found in today’s federal unemployment report — and chronicled in his latest edition of “About Those Jobs Numbers”:

Trust me, however, I regret being right.  When it comes to being right about our tanking economy, there’s nothing to be gained in gloating.

In last month’s “About Those Jobs Numbers,” I lamented the recently-posted and very weak 0.2 percent growth in the national gross domestic product (GDP).  I feared the GDP could be worse than stated, and I suggested at the time that “[t]here are economists who believe that this number will actually be revised to show negative growth once all the numbers are known.”

It was.  The GDP did really shrink by 0.7 percent upon a revision to the report announced in late May.  No growth whatsoever.  A contraction of the economy, in fact.  It’s the fourth quarter during the course of the Obama Administration in which this has happened.  And it could be worse this time.  Jeremy Lawson, the chief economist at Standard Life Investment, speculated in the Washington Post that the economy may now “rebound more slowly” than it had after previously negative quarters due to “downward [economic] pressures that are more persistent than in the past.” 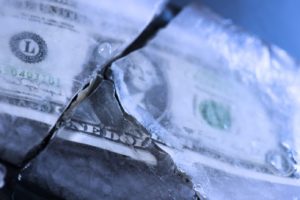 Of course, the Obama Administration and its supporters are trying to play this bad news off as a by-product of the snowy weather.  “Climate change” is an implied culprit — what they used to call “global warming.”  Jason Furman of the White House Council of Economic Advisers, for example, told the Post that the economy consistently underperformed “in parallel with intensifying winter weather.”

It’s almost summer, yet I don’t see many indicators of new economic improvement.  It’s true there is still some remaining ice on the ground from Boston’s terrible storms, but it’s no excuse for a sluggish economic nationwide.  Blaming the weather is a cop-out.  Furman appears to be right.  Unfortunately.

The sad fact of the matter is that the U.S. economy is still in a “ditch”.  After all those years of his leadership and the assurance from Barack Obama when he first ran for president that he would get the American economy out of that ditch and back on track, we seem to instead be on the verge of even more economic peril.  For example:

All of this makes the newest jobless figures from the federal Bureau of Labor Statistics (BLS) — which some may try to celebrate — all the more troubling.

The official unemployment rate rose to 5.5 percent.  And the U-6 alternative rate, the indicator many people feel is the better predictor of the full unemployment picture because it adds the underemployed and able-bodied who quit looking to the official rate, remains around twice as high at 10.8 percent.  While 280,000 jobs were reportedly created in May, above the advance prediction of 201,000 jobs that was made just prior to the government announcement by the private payroll company ADP, the elation at the higher-than-expected number can only be fleeting.  That’s because the labor force participation rate remained an anemic 62.9 percent.  It’s been low like that for far too long.

Per usual, and very unfortunate at that, is also the fact that the constituencies having had the most faith in the President thus far are doing the worst under his jobs-creation agenda (or lack thereof).  Black unemployment, for instance, is up to the double-digits again at 10.2 percent (5.5 points more than whites) — with black teens suffering terribly through an astronomical jobless rate of 30.1 percent (passing back into the 30s, where it has been for much of the Obama presidency).  Hispanics are experiencing an unemployment rate of 6.7 percent.  There were an estimated 50.6 million women who were unemployed in May.

During the last month, there were some major layoffs announced despite the unexpectedly high job-creation number cited today by the BLS.  Perhaps the most noteworthy was that banking giant JPMorgan Chase would be cutting around 5,000 jobs over the course of the next year.  If this bank fails, will it be saved like big banks were in the last crisis — and saved at taxpayer expense?

It was the energy sector that seemed to take the worst hit.  Murray Energy, a coal-mining company based in the east, announced that approximately 1,800 miners would be laid off.  Alpha Natural Resources similarly announced economic worries were forcing the company to let more than 400 of its miners go as well.  Murray Energy CEO Robert Murray didn’t mince words, blaming the layoffs on “the ongoing destruction of the United States coal industry by President Barack Obama.”

But mining losses are not the only fossil fuel jobs lost in May.  In the oil industry, Schlumberger Limited announced plans to cut 20,000 employees in its oilfield services operations.  Halliburton Company is also cutting 9,000 jobs worldwide, while Baker Hughes Incorporated is shedding 10,500 jobs.

All this bad news about jobs comes as consumer prices continue to increase.  Recently-released statistics show that April was the third month in a row with increased consumer costs — climbing 0.3 percent since January.

Homeownership appears to be in decline, allegedly bringing devastating side effects along with the trend.  A new report by the National Association of Realtors found that the plunging rate of homeownership is possibly contributing to a wealth gap.  In a survey of 100 metropolitan areas, it was found there was a decline in homeownership that went hand-in-hand with an increase in the gap between the rich and poor.  This happened in over 90 of those municipalities that were studied.

Lawrence Yum, the chief economist for the Realtors, said: “Homeownership plays a pivotal role in the U.S. economy and has historically been one of the primary sources of wealth accumulation for middle-class families… [H]ome ownership has plunged to a rate not seen in over two decades.  As a result, the country has become more unequal as the number of homeowners has fallen while the number of renters has significantly risen.”

Diminishing homeownership seems to have become so much of a problem that people are compensating for it by rebranding the American Dream.  According to the results of a survey commissioned by the American Institute of Certified Public Accountants (AICPA), only 11 percent of people now consider homeownership as the best indicator of financial success.  Replacing it is the goal of having ample savings for retirement.  AICPA’s Ernie Almonte said: “We’re seeing that today’s American Dream is greatly shifted from the one defined by previous generations.  No longer are home ownership and upward financial mobility the hallmarks of financial achievement.”

As I mentioned last month, there are too many people who aren’t saving for the retirement stability that so many now prize as the hallmark of success.  I noted that another survey of Americans found that “only 65 percent of workers polled have anything saved for retirement.  Only 28 percent say they have more than $1,000 saved for retirement, and more than a third said they haven’t saved any money at all for retirement.”

One cannot truly be preparing for a secure future and not be anticipating a nonexistent or debilitated Social Security benefit at the same time.  While the politicians seemingly ignore the problem, there’s no denying that the money going into Social Security’s coffers is being paid out to others almost as quickly and the notion of the peoples’ investment being secure is a myth.

People simply should not expect Social Security to be there for them if they fail to save enough.  It’s no longer a reliable safety net, much less a hammock.  Former Federal Reserve Chairman Alan Greenspan, one of the most respected living economists, recently called the Social Security Trust Fund “a meaningless instrument” because there are no actual savings in it — just “current expenses.”  With the national debt “way underestimat[ed]” and the possibility of more unanticipated expenses such as new bank bailouts in the future (think JPMorgan Chase), Greenspan expressed grave pessimism about the nation’s fiscal health.

It’s a potential “perfect storm” of pain for the American economy.  Jobs are being lost, costs are rising and the traditional means of securing wealth and a stable future are slipping away.

The ditch Obama complained about in 2008 has not been overcome.  Instead, it would appear to have grown into a chasm from which the vehicle that is the American economy won’t be able to escape unless it’s super-charged very soon.

Obama asked for a shot at saving it in 2008 and failed spectacularly.