Did President George W. Bush keep us safe, as claimed by Gov. Jeb Bush in the recent GOP debate?  RT Network host Thom Hartmann and his “Progressive Roundtable” call this claim a lie, but Project 21 co-chairman Horace Cooper believes that Americans are less safe under President Obama than they were under President Bush. 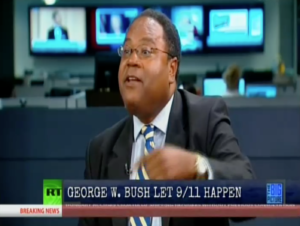 “It was exactly the decision to walk away [from the War on Terror] that has allowed the ISIL problem and the metastasization in the region,” says Cooper.

Cooper also says that the thwarted Times Square terrorist was not afraid of retribution.  “He understood that we were not going to respond with the type of response that we did after 2001.”

Later, Cooper criticized government leaders who have refused to take responsibility for the poisoning of the Animas River in Colorado.