What is the next step for the University of Missouri, now that its president and chancellor have resigned? Project 21’s Stacy Washington explained to Newsmax host Ed Berliner why two proposed reforms will NOT help, and suggested one idea that could make a huge difference. 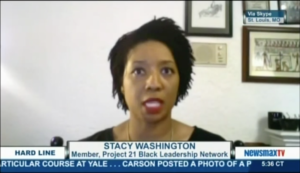 “They want to institute mandatory diversity training for all incoming students,” Stacy said on the November 9 broadcast. “I think that’s a load of malarkey. You understand what kind of training falls under ‘diversity?’ It’s not the kind of stuff a lot of parents here in Missouri and elsewhere, who are sending their kids here for quite a pretty penny, are gonna want their children to undergo.”

There’s also the issue of them wanting white people to denounce their privilege. Since when should anyone be ashamed of themselves for being whatever their ethnicity or their race is? Do we all have to apologize for any privilege that we have, if we’ve ever been successful, if we have more than what they say we should have? That is the problem here.

On the other hand, there’s something that those students can do… The thing that beats racism and glass ceilings is excellence. So if you’re a Mizzou football player, you play the best football you can. Make it a winning season. Stop focusing on these incidents.

Watch Stacy’s complete 11/9/15 appearance on NewsmaxTV’s “The Hard Line” below: