In light of President Obama’s State of the Union address, Project 21’s Stacy Washington appeared on Newsmax TV’s “The Hard Line” last night to address whether the president is effectively tackling the issues that affect African Americans. 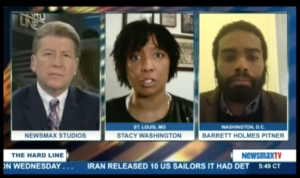 “There’ve been a lot of opportunities for this president to come out and talk about things that really matter to the black community — the jobless rate, the fatherlessness rate, the amount of children who have grown up in homes that are poverty-stricken and receiving food stamps and SNAP benefits,” said Washington.  “And at each opportunity, the President has pivoted to his agenda, preferring to instead focus on immigration, illegal immigration, demonizing Americans for their supposed treatment of Muslims, and his obsession with controlling guns.

“The true issue in inner-city communities is the lack of fathers.  And Barack Obama happens to be an excellent husband and father, and he has not once taken a step into that area and said, ‘Look, we’ve got to stop having children out of wedlock.  We’ve got to start focusing on families.’”