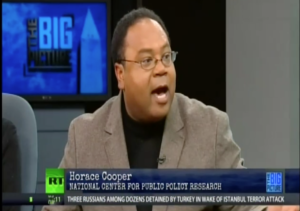 First, Horace challenged host Thom Hartmann’s claim that our nation would be better off with a single-payer health care system similar to those found in Canada and Europe.

“Explain why, even though all of these other systems have all these ‘assets’ and ‘advantages’, we see so much health care tourism to the United States,” challenged Cooper. “They come here because market forces are allowing for dynamic treatments that many places simply aren’t going to be able to [provide]….Why are Canadians, when they have high-specialty, intensive health care needs related to heart and vascular circulation issues, coming here?”

The health care debate can be viewed here:

Later in the program, the topic of campaign finance came up in light of this week’s State of the Union address.  President Obama wants greater transparency regarding political contributions.  Horace argued that if contributions are to be made public, there should be greater accountability as to how that information can be used.

Horace said he believed in transparency “until all of a sudden, people started getting IRS audits, people started getting EPA audits, all kinds of sting operations based on the contributions that they made. And because you progressives go out and do things in the dark of the night that are criminal against these people and targeting them.”

Horace suggests that it should be “a felony with mandatory sentences if you use information that you get from the FEC… to oppress or in some way punish [people] for their actions.”

View the campaign finance debate below.