On RT Network’s “The Big Picture with Thom Hartmann,” Horace Cooper went on the attack against Planned Parenthood, and urged the organization to refuse federal funding.

“The lion’s share of Planned Parenthood’s work is killing people. They ought to call it Death Care, not Health Care,” said Cooper on the February 3 show. “But if they want to operate with impunity they should do so without taxpayer support. You will find the scrutiny goes away completely…’” 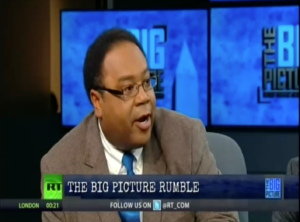 “If an RT reporter goes to a Whole Foods grocery store and attempts to sell tainted beef to them and videotapes it, you guys would be telling us that’s good journalism. You wouldn’t be saying that that person ought to be charged criminally for attempting to put poisonous material into the market,” said Cooper.

The portion of the show dealing with Planned Parenthood and abortion can be viewed below: