28 Apr 2016 Lies About Voting Rights Act Should Be Rejected: They are Divisive — and Wrong! 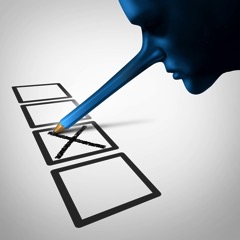 This year marks the first presidential election in 50 years without a functioning Voting Rights Act — and it’s not going well.

The left lies to push its agenda, but these lies come at a cost. Cynicism, for one thing. People falsely believing their fellow citizens are biased against them, for another. Unnecessary and unhelpful divisiveness.

No one (to my knowledge) claims the left doesn’t have the right to make its best case for left-wing policies, but even the left should realize that if it needs to tell lies to make that best case, it should reconsider the policies.

In brief, here’s the truth:

in 2013, in Shelby County, Alabama v. Eric H. Holder, Jr., the U.S. Supreme Court invalidated one half of one section of the 19-section Voting Rights Act. Not all 19 sections, but one-half of one of 19 sections.

Every other protection in the Voting Rights Act remains. 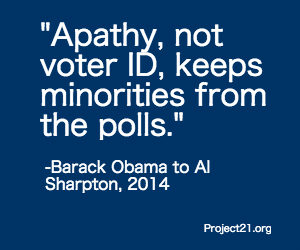 Even the notion that certain states and localities could be required to get advance permission — a procedure called “preclearance” — was upheld, as long as the states and localities subjected to it have been determined by Congress to have a recent history of adopting voting laws with racial or other bias.

Quite a stretch to claim that we have no functioning Voting Rights Act whatsoever.

In this age of social media, if any state or locality were to try to change a voting law to make it racially biased, there would be plenty of attention. There’s plenty of attention even to false allegations of bias! It’s not 1965 anymore.

Think Progress isn’t the only liberal to lie about this. Last year, Jesse Jackson falsely claimed the Supreme Court had made the Voting Rights Act “null and void.” Project 21’s Cherylyn Harley LeBon, Horace Cooper, Shelby Emmett and Joe Hicks explained at the time why Jackson’s allegation simply isn’t true. I recommend their statement, and the links within it, to anyone who wants more details on this issue.

Reasonable people can disagree over such issues as whether there should be early voting, voter ID, and so forth, but facts are facts. The United States of America still has its — very powerful — federal Voting Rights Act.